Multnomah Falls
Why We Went Twice in One Trip
Troutdale, Oregon, USA 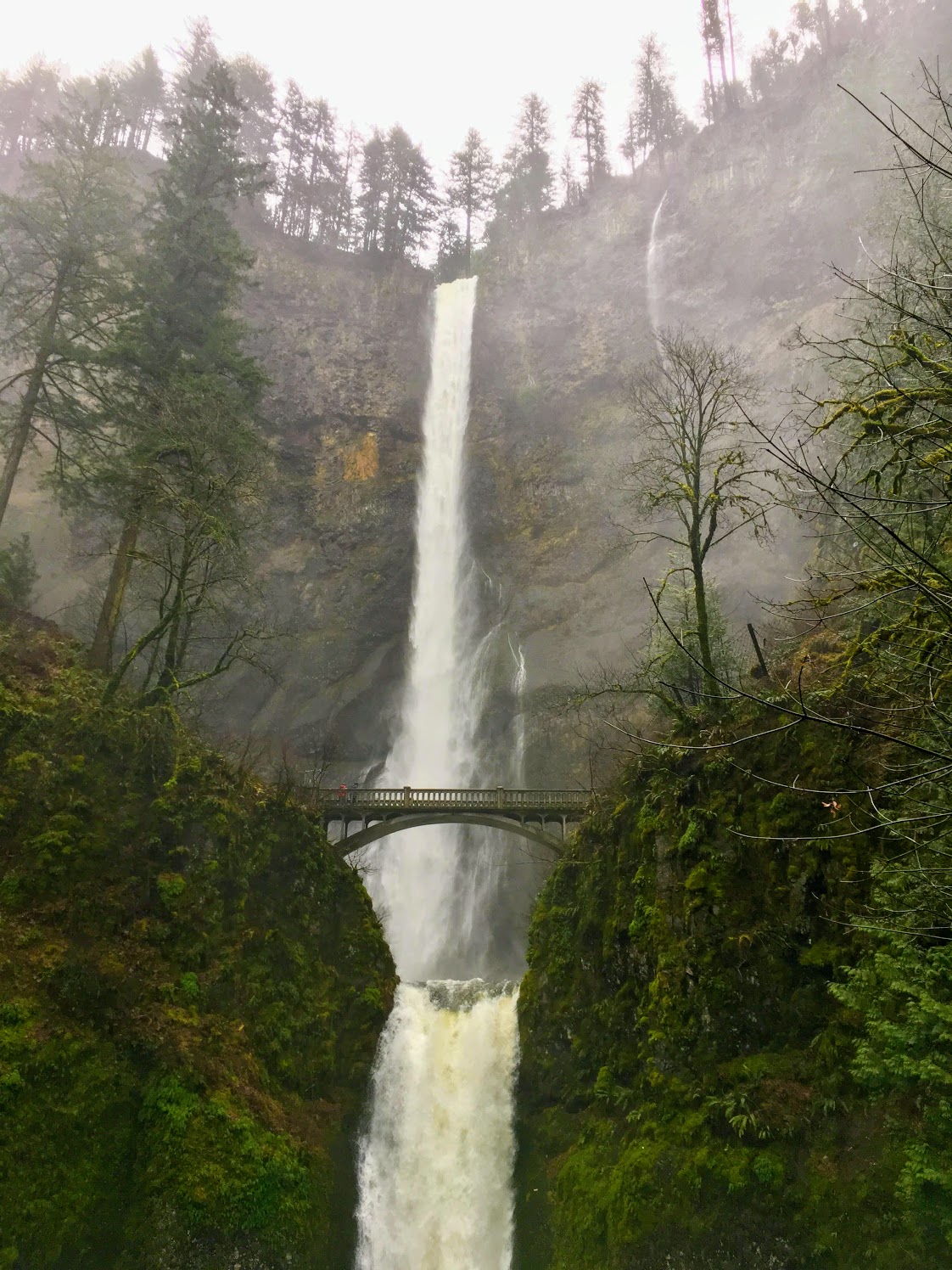 Multnomah Falls is probably one of the most iconic and photographed waterfalls in the United States of America...and it's always been on our bucket list, even with it's touristy allure.

But, here you'll find out why this massively tall waterfall became much more than that to us and why we just had to visit it, not once, but twice on a single trip to Oregon.

Keep scrolling to read about our experience at this iconic Oregon waterfall...

Click here to skip our story and check out all of the technical stuff for your visit.

As I've mentioned elsewhere on the site, Oregon was a dream trip for us and because of our love for waterfalls and thanks to tons of Instagram photos of the stunningly beautiful falls in the Beaver State, particularly in the area surrounding the Columbia River Gorge, we simply had to go.

So, on one of my particularly itching to travel moments in early 2020, I began to research and figured we had to go soon.  Life is too short and this needed to be our next destination on our waterfall chasing hit list, so with just a couple of weeks' notice, in January I started to plan our trip for early February!

Fast forward a couple of weeks and there we stood...at the base of majestic Multnomah Falls! 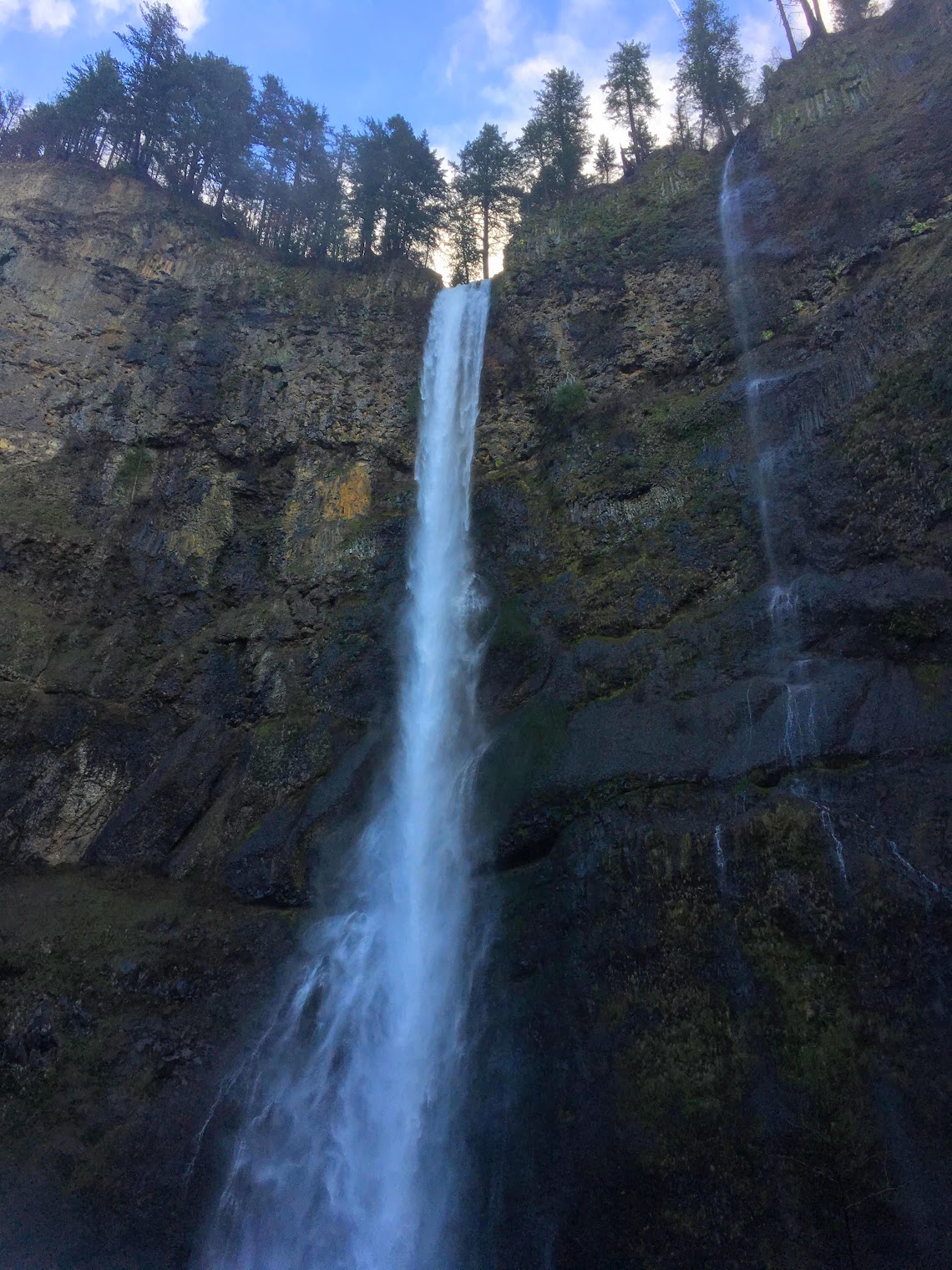 Our view from the Benson Bridge on the second visit.

It was nothing like we had ever seen...truly!  I was literally stammering all over myself to form the words, some kind of word that would do any justice in describing what we were seeing.  Honestly, I think we both just shut up and enjoyed the view for a few moments. 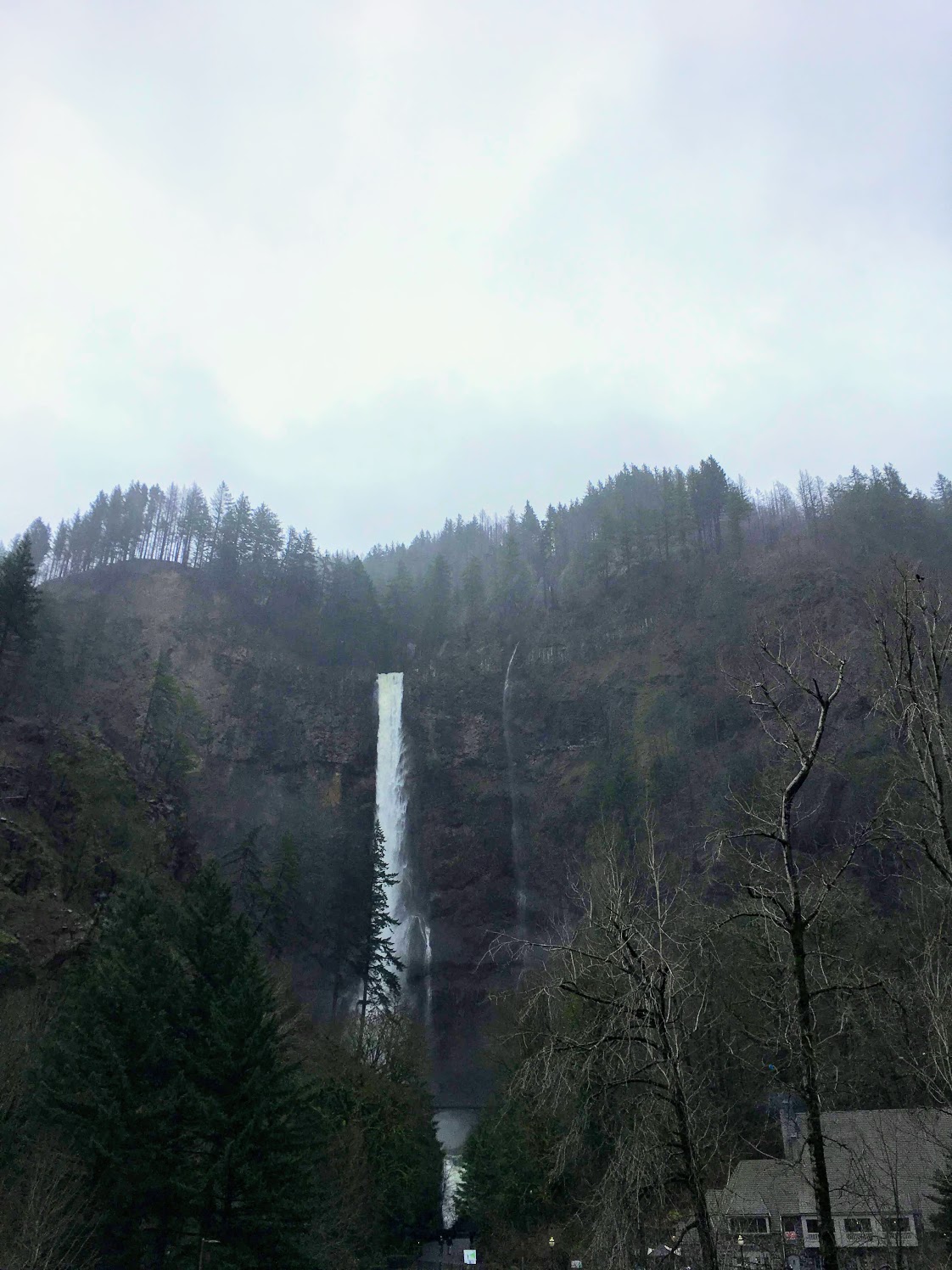 But, what she didn't know yet is that I had a secret agenda...and one that I could not let her know on this, our first visit to Multnomah Falls.

No.  I would have to think of a way to get her to come back, because I didn't have everything I needed to carry out my secret plan, my covert mission.  Thankfully, it was an extremely overcast day, so I convinced her that we would get better pictures on one of the more sunny days later in the week, so we must come back and she agreed.

I had enlisted several folks to assist logistically in "the plan", all the while trying to keep it totally top secret from Frankie until the very last second.  But, it was NOT all going according to plan.

The object most critical to the plan had not arrived as planned and when I inquired about it, I was first told that it was shipped to the wrong address across the country.  Upon further investigation, I found out that it was actually just running a day late, which was problematic because it would miss our scheduled flight.

So, on the Plan B.  I asked my brother to ship the item to the AirBnB where we would be staying, therefore I had to let our hosts in on the covert mission.  They were nice enough to play along, so a couple of nights into the trip I was summoned to their home to get some "toilet paper"...upon receiving the TP, I also picked up the real goods I was after.

The Moment of Multnomah Truth

The day we returned to Multnomah Falls was several days into the trip.  We went early in the morning and my alibi was that I had not used the iPhone tripod that I had bought for the trip yet, so we needed to use it to get some photos of us in front of the falls at Multnomah.

I set it up, framed up the shot, started the video recording, and ran over to Frankie and dropped to one knee as I opened up the engraved wooden box with the ring, laying in a green bed of moss...and asked her to marry me. 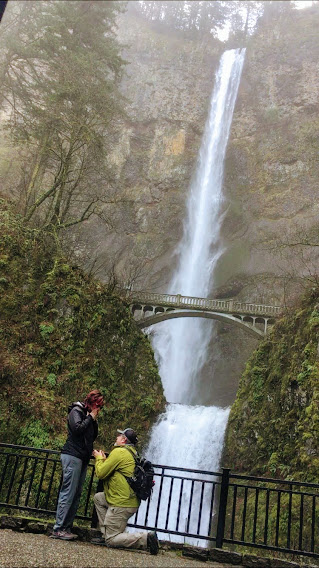 She said something through her shock and tears like, "Well, I've been waiting.  I guess I might as well.  Yes!"

Needless to say, she made me the happiest man alive at that moment and Multnomah Falls will live forever in our hearts as an intensely special place because of it.

The Hike and Afterwards 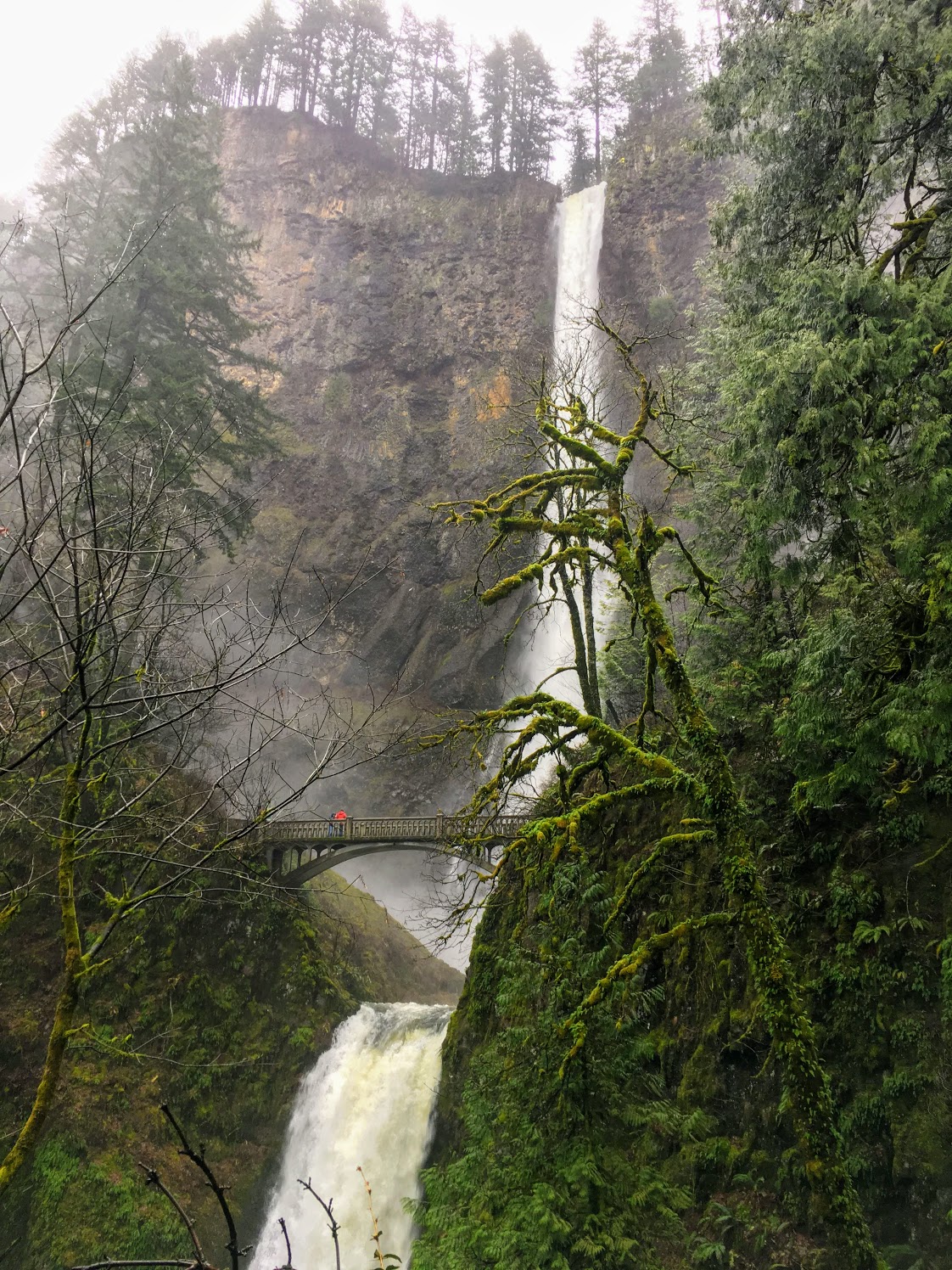 The Benson Bridge from a distance with mossy tree in the foreground. The Benson Bridge was built over Multnomah Creek in 1914 and it still stands today!

We saw many beautiful cascades and falls that morning and then descended the mountain to eat another delicious meal at the Multnomah Lodge Restaurant. 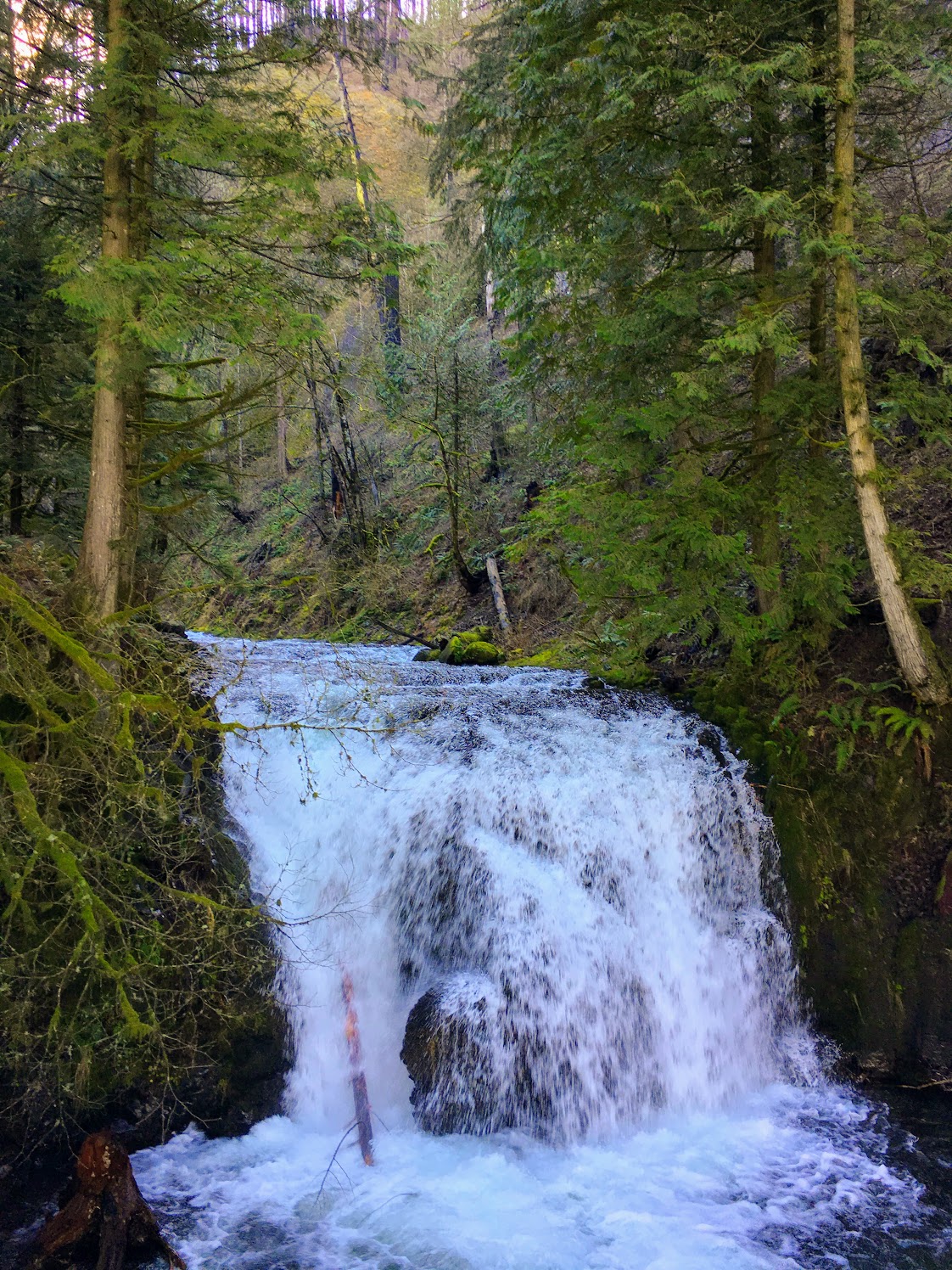 We were married months later in September at another one of our favourite waterfalls back home in Tennessee and we're still chasing waterfalls together. 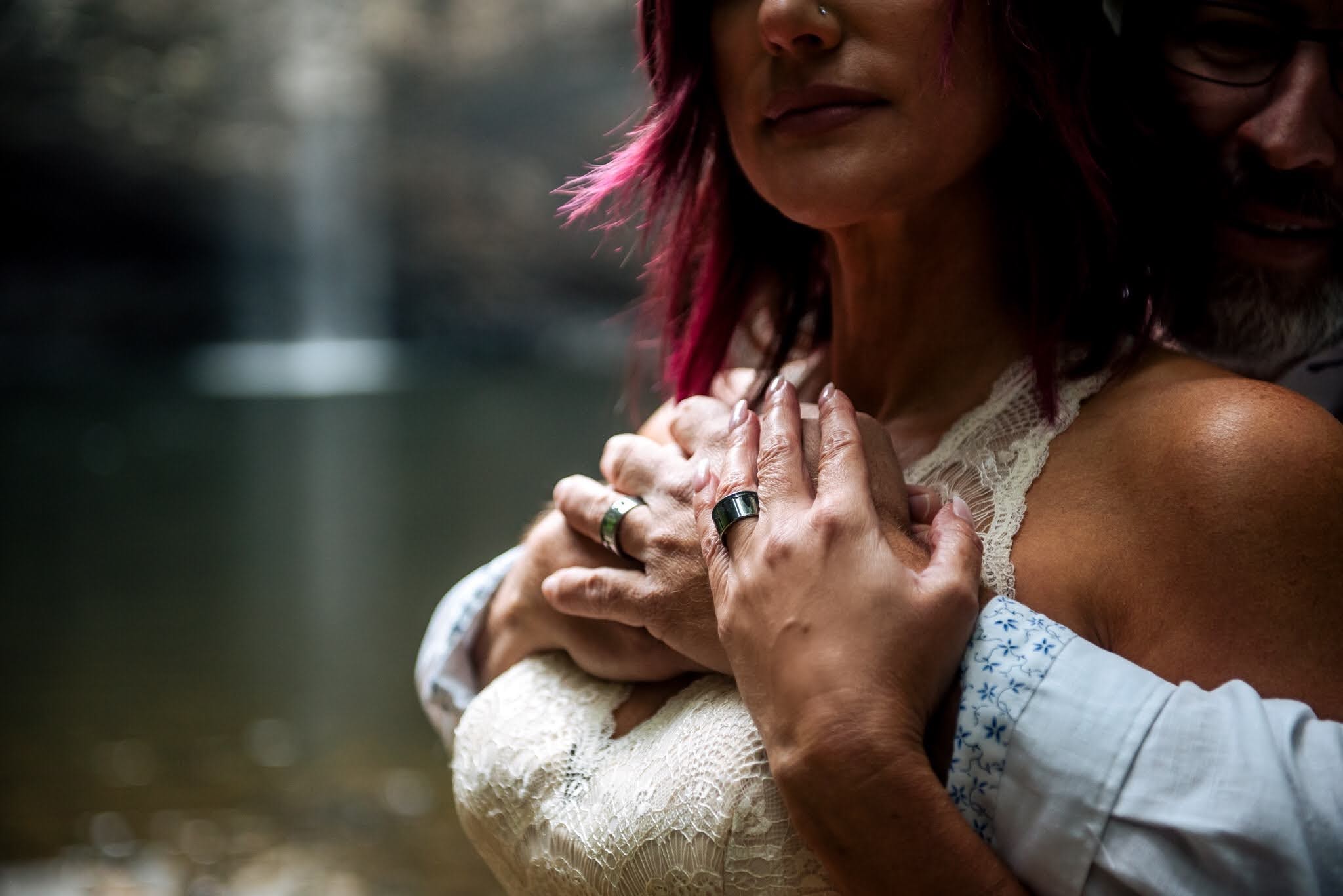 Wedding photo at a waterfall back home.

Dog Friendly: YES on a leash

Cell Service: Yes, but could be spotty at times

I would be remiss if I failed to recommend that you eat at the Multnomah Falls Lodge Restaurant. 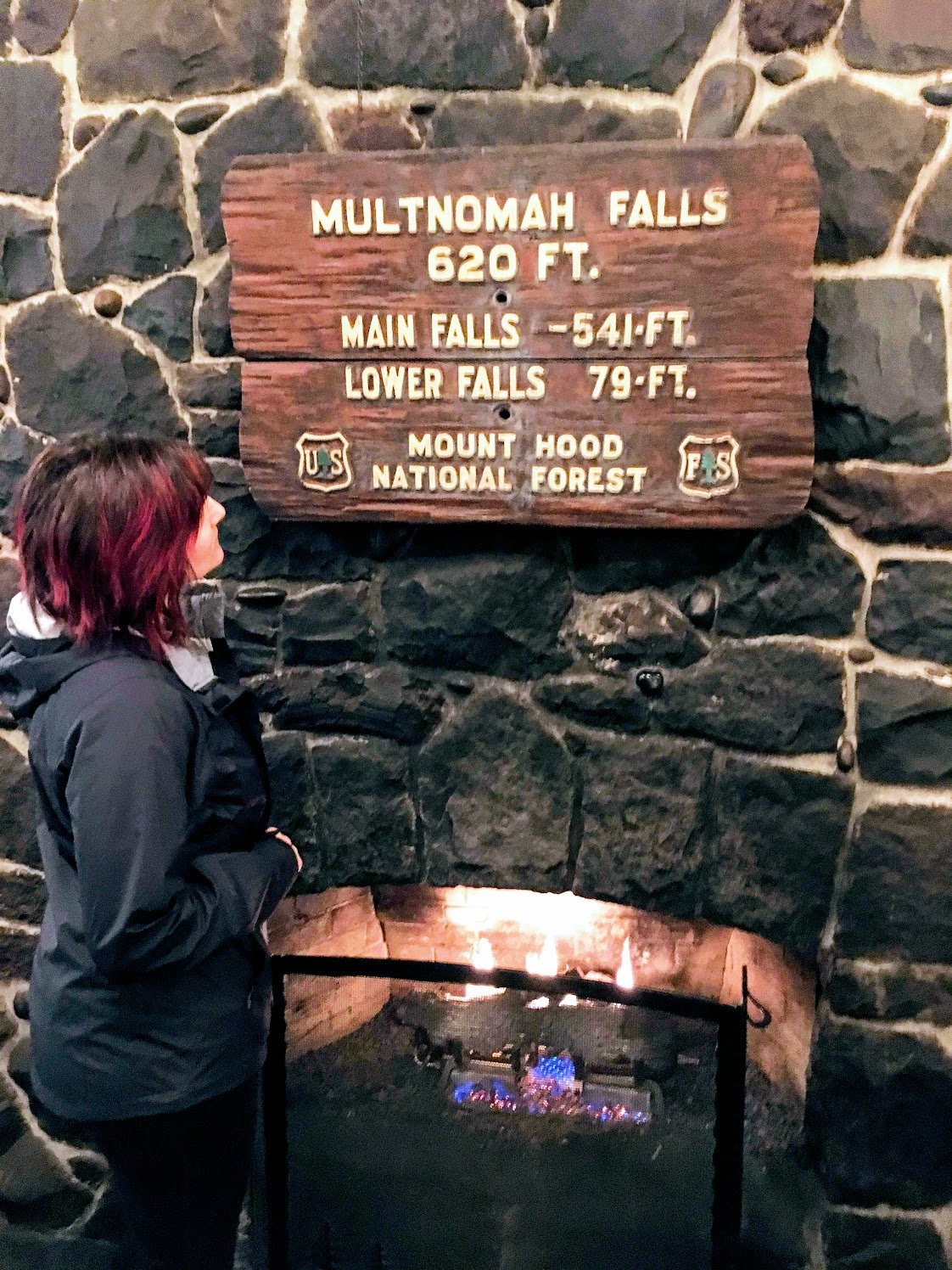 One of the beautiful fireplaces at the lodge.

The restaurant is located in the quaint old lodge at Multnomah where people stayed in times past.

Overlooking Multnomah Lodge from the trail.

We ate there twice and both times were an awesome experience, great service, and delicious cuisine!  They even had great vegetarian options, which thrilled us as that was Frankie's way of eating at the time. 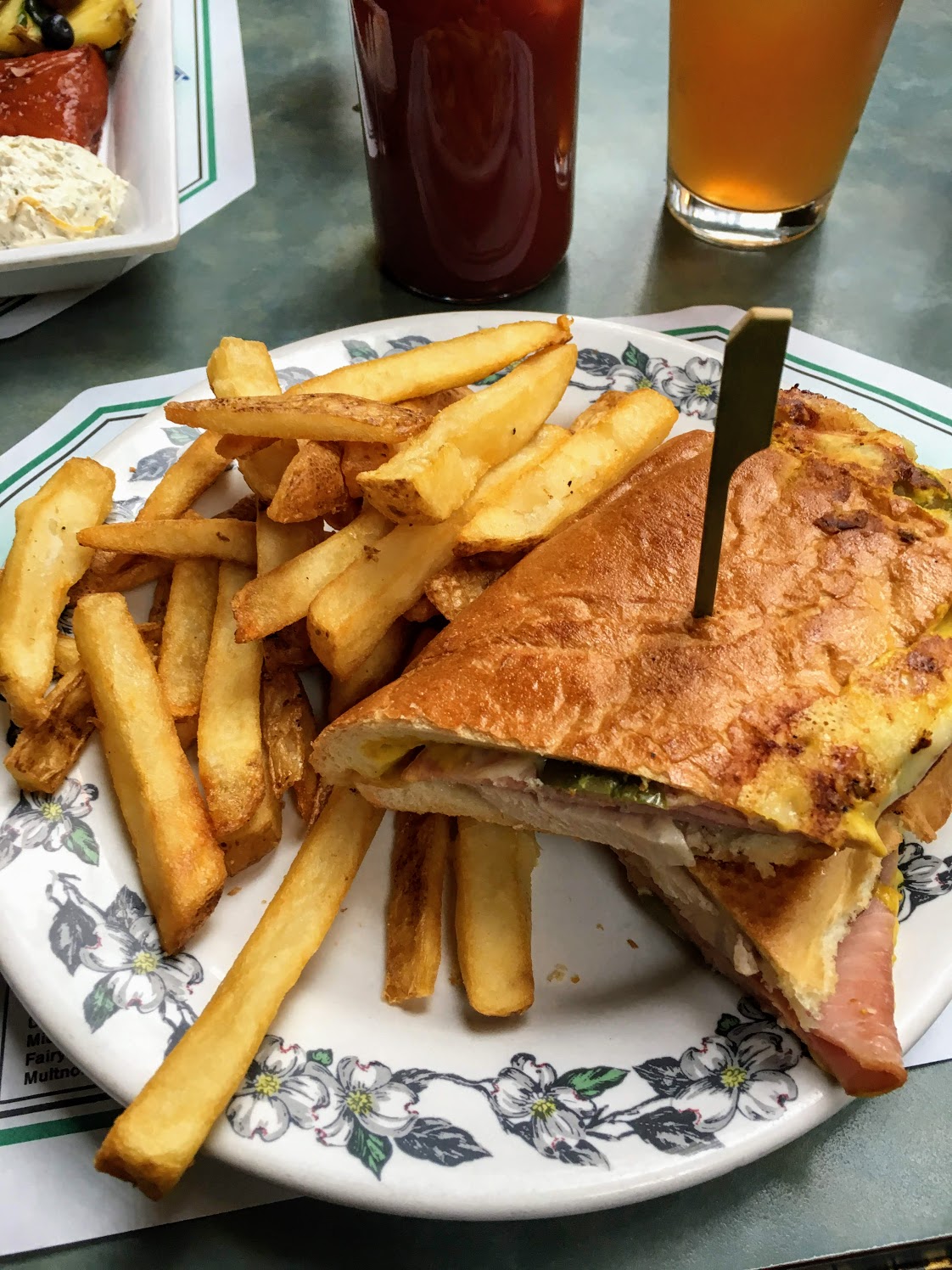 I believe their menu rotates seasonally, but don't quote me on that.  Either way, you've gotta eat there at least once! 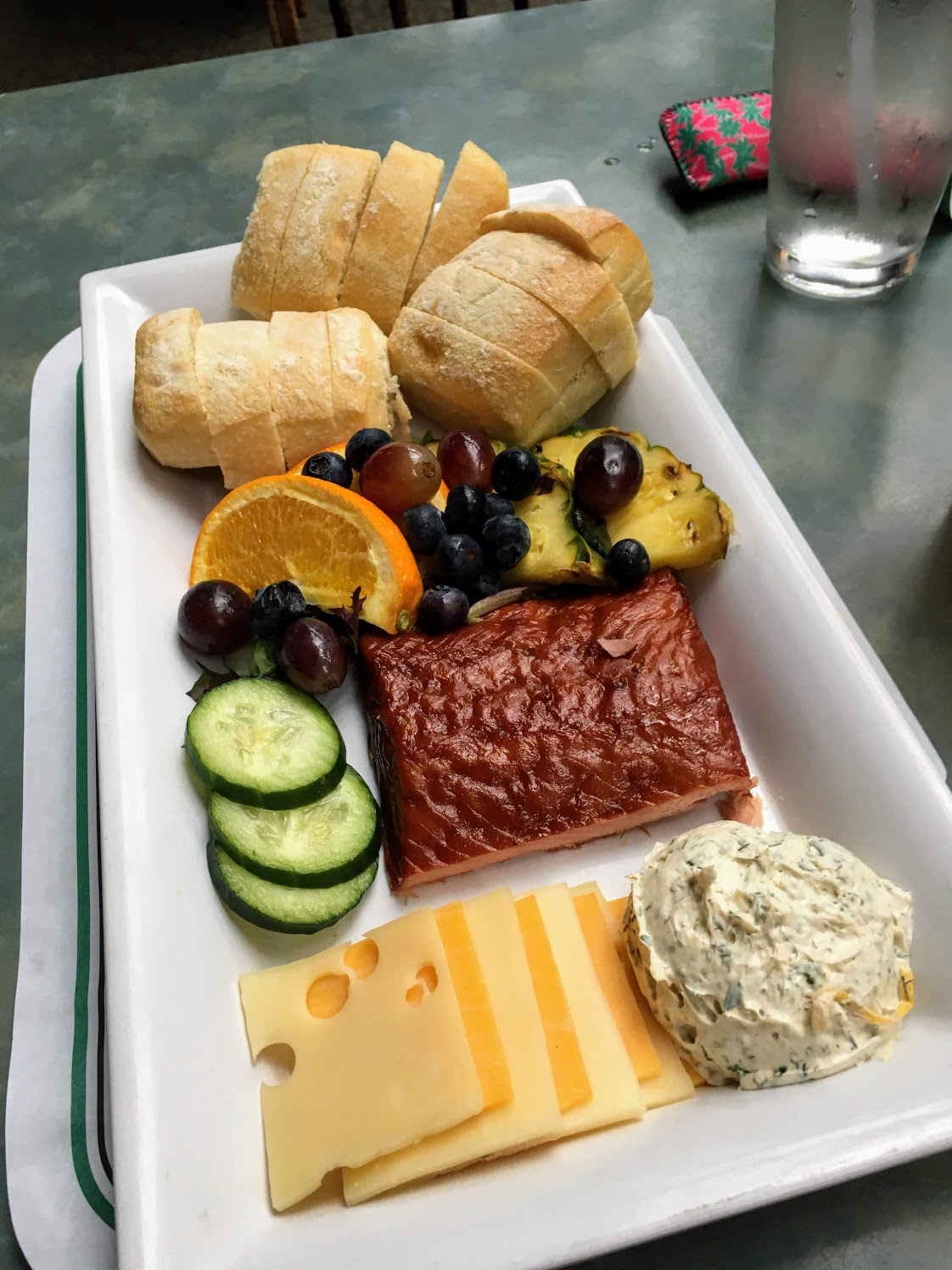 The smoked salmon plate was amazing!

We even had a view of the falls as we ate both times we went! 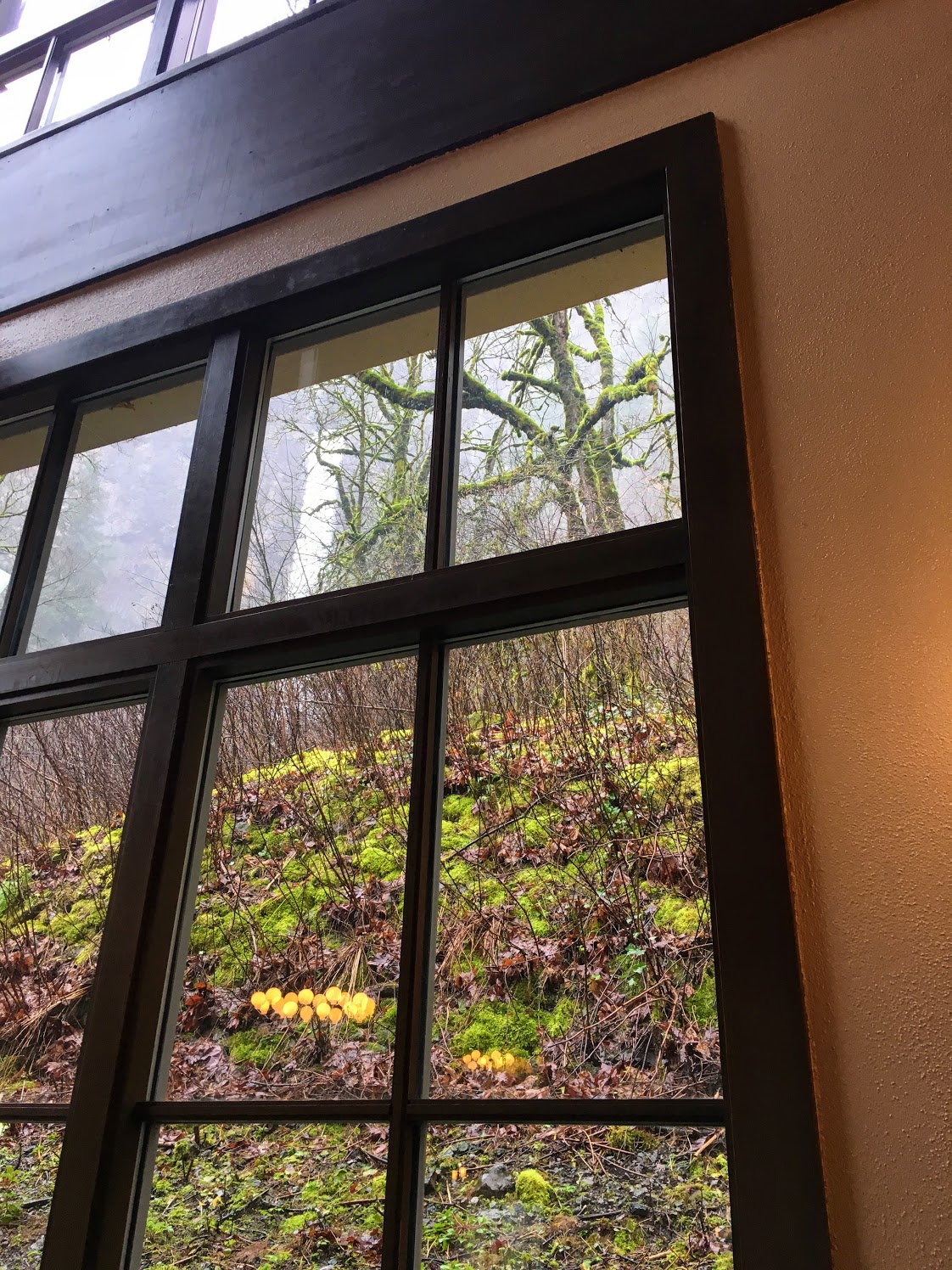 See Multnomah Falls out the window of the lodge restaurant? 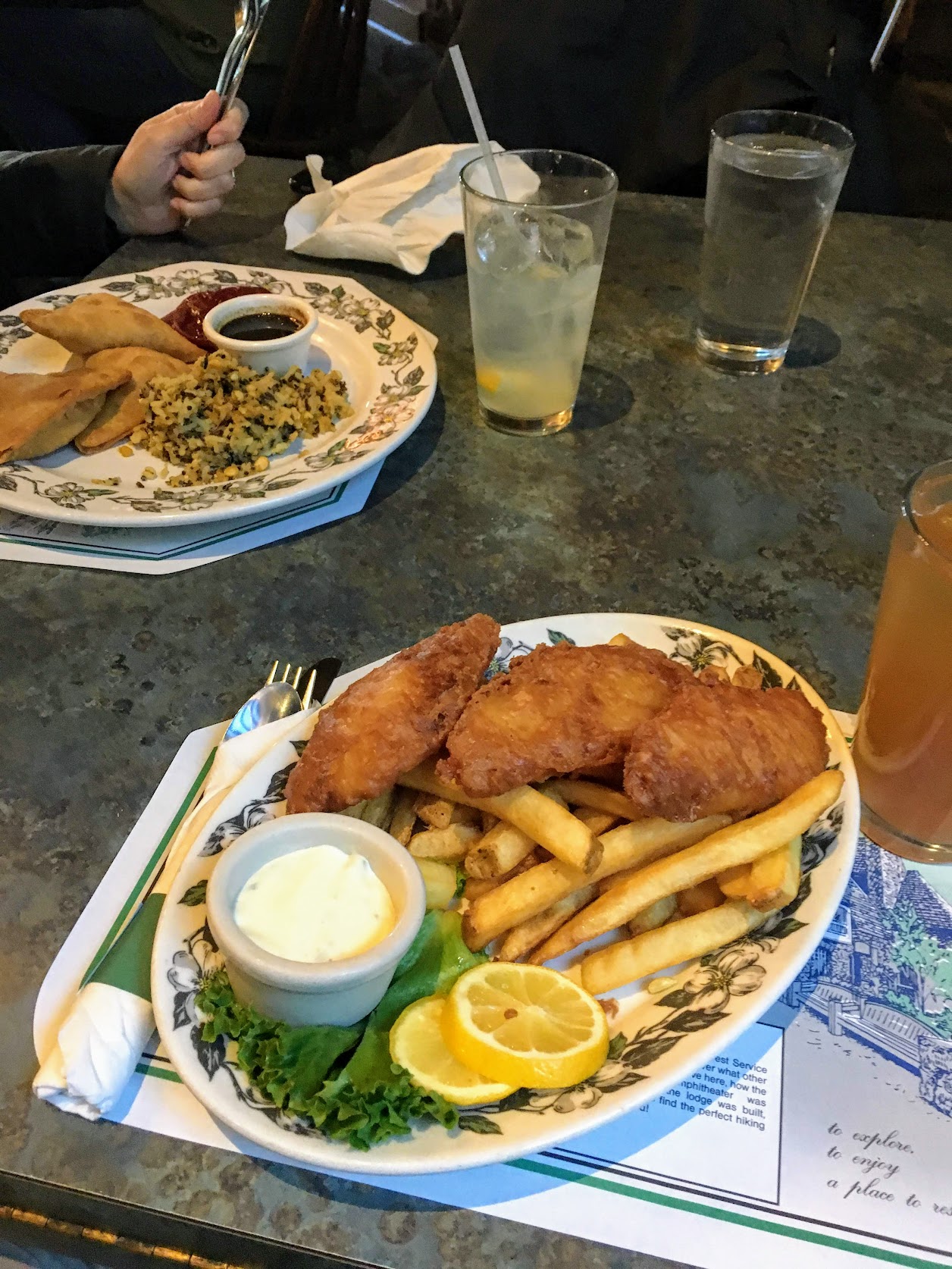 Engangement Lunch: Veggie Dumplings for her and Fish-n-Chips for me!

When you visit Multnomah Falls and all of the naturally beautiful area around the Columbia River Gorge and Mount Hood, we highly recommend staying at the awesome little tiny house we stayed in and the wonderful hosts that helped so much in our little surprise waterfall / engagement adventure.

You can find their property on AirBnB here: Tiny House on Badger Creek Farm.

And when you stay with them, be sure to let them know that Chris and Frankie of Waterfallz.com sent you.

There are many areas to camp on either side of the Columbia River Gorge from Multnomah Falls.  Research for your trip from the map below: