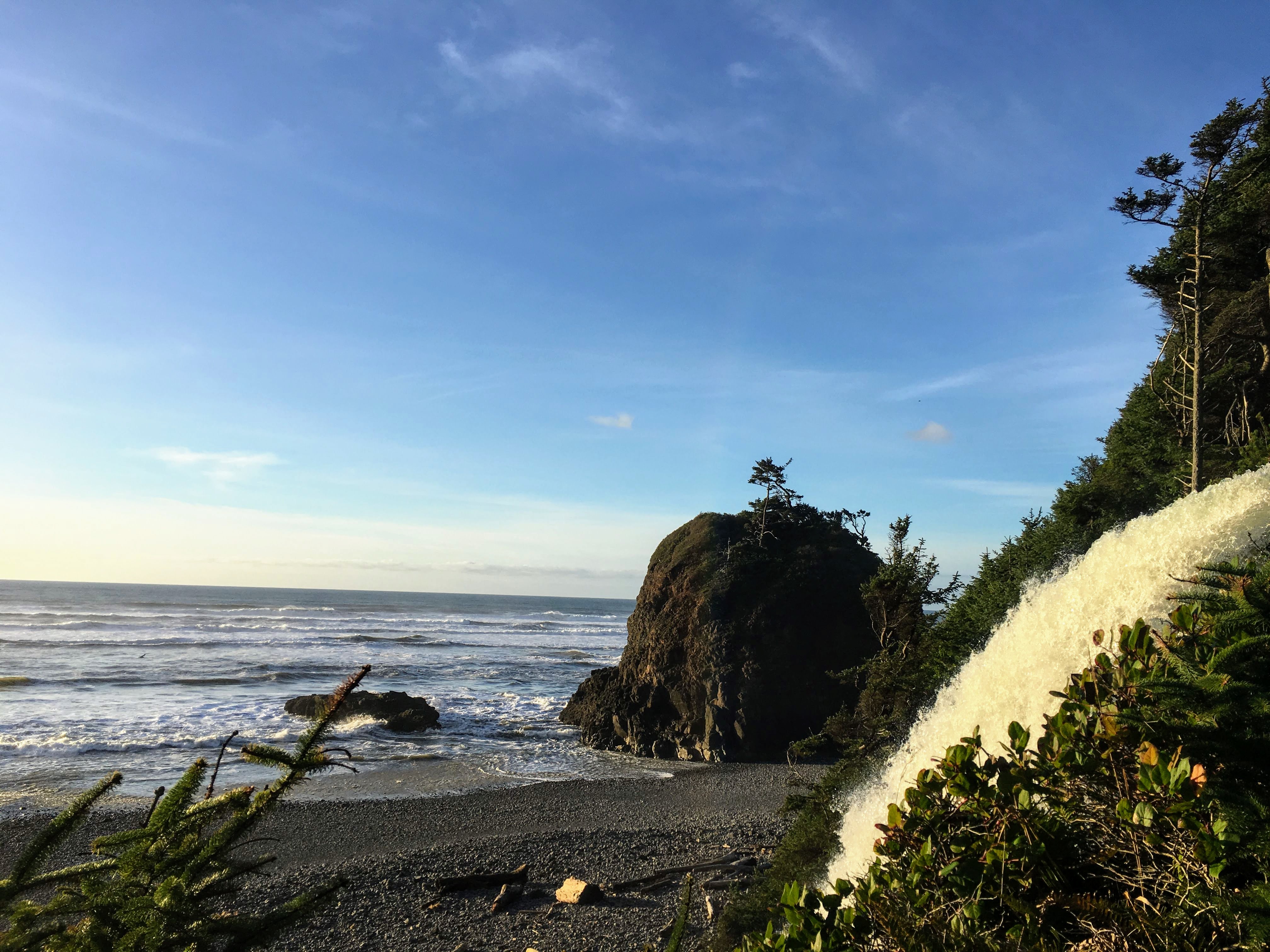 Oregon Coast waterfalls dot the rocky coastlines, mountains, and hills of the Beaver state.  Our only regret is that we only got to see 3 on our visit.

But, if you travel to Oregon and want a great scenic road trip, based on what we saw there, you will not regret a trip up or down the romantic Oregon Coast.

Our trip to Oregon was only for a week and we were there, mostly, to see waterfalls...but we knew we had to get to the Oregon Coast for at least one of our days there...If for no other reason but that we had both seen plenty of mountains and we had both been to the sea, but neither of us had ever been to a coast that boasted mountains on the sea. 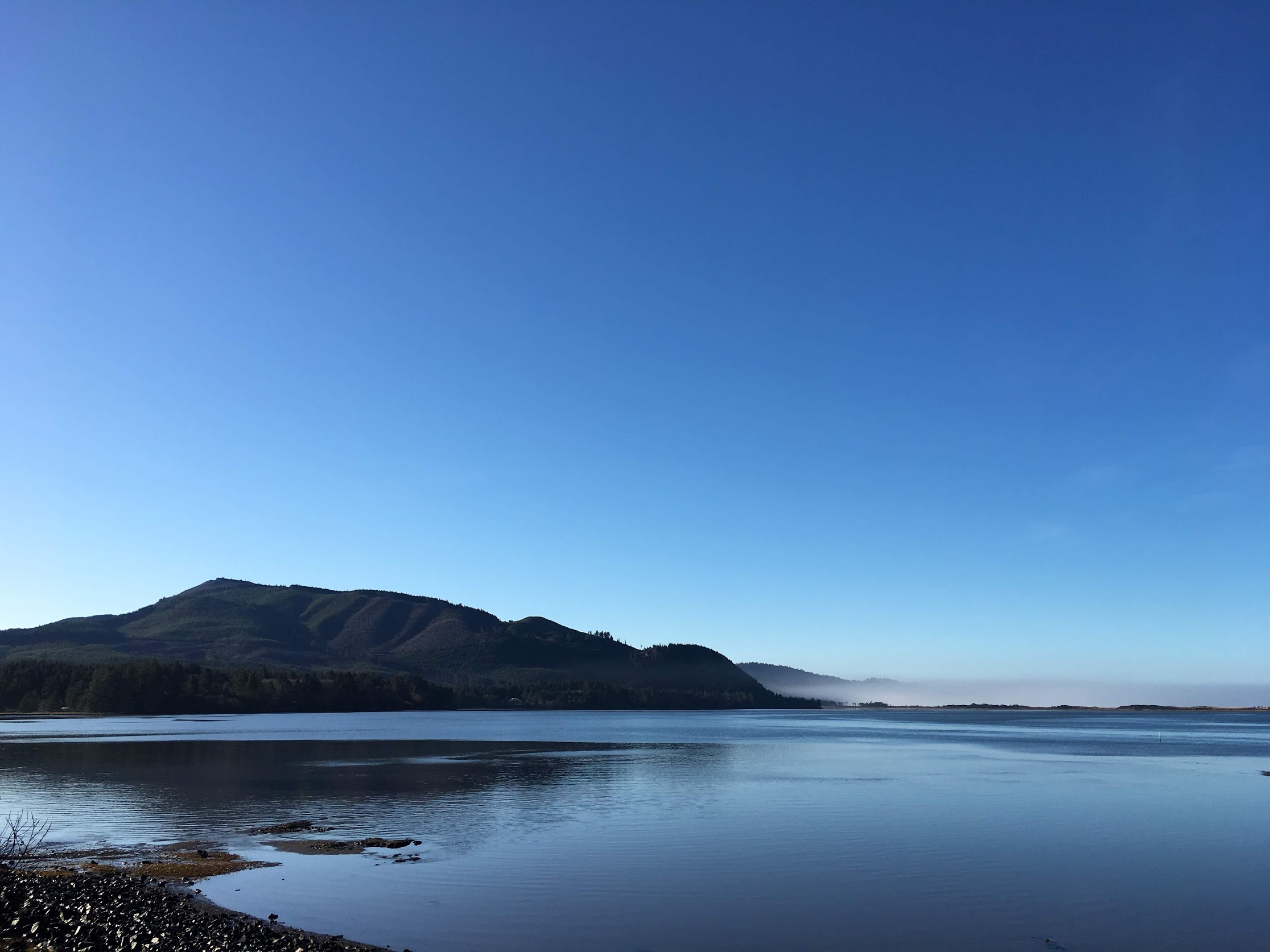 We drove from our AirBnB, just east of Portland, through the Tillamook State Forest and out to the Cape Lookout State Park area along the coast of northern Oregon.

We started our hike at the day use parking area for the Cape Trail and did not regret it one bit! 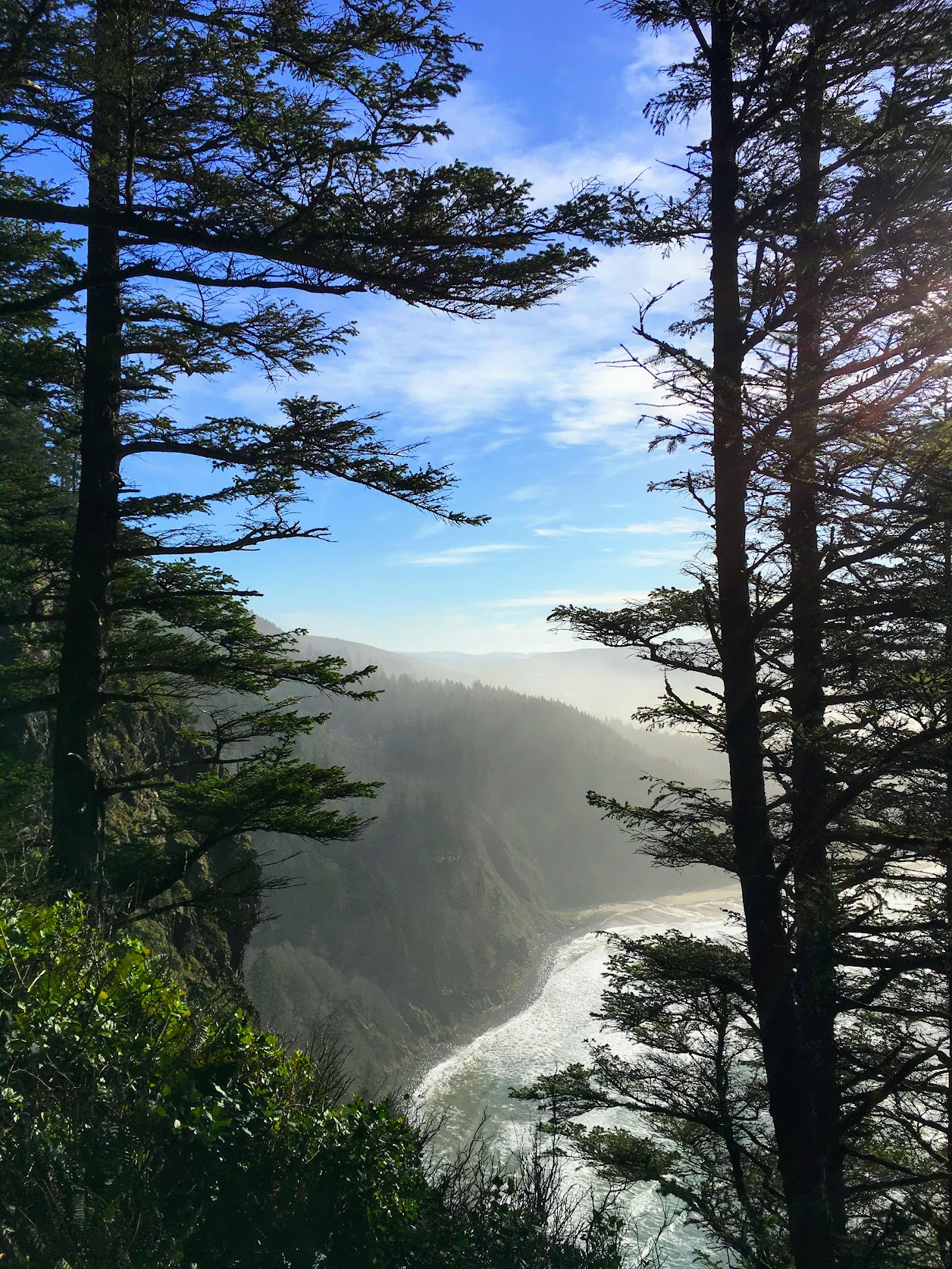 Much like every trail we hiked while in Oregon, we were confronted by scenery that we had only seen on instagram or in the movies at this point, but we were now fully immersed in.  Because of that, it is immensely difficult to describe both the scenery and the emotions we felt at the time...so, I'll let the pictures do that...as best as they can. 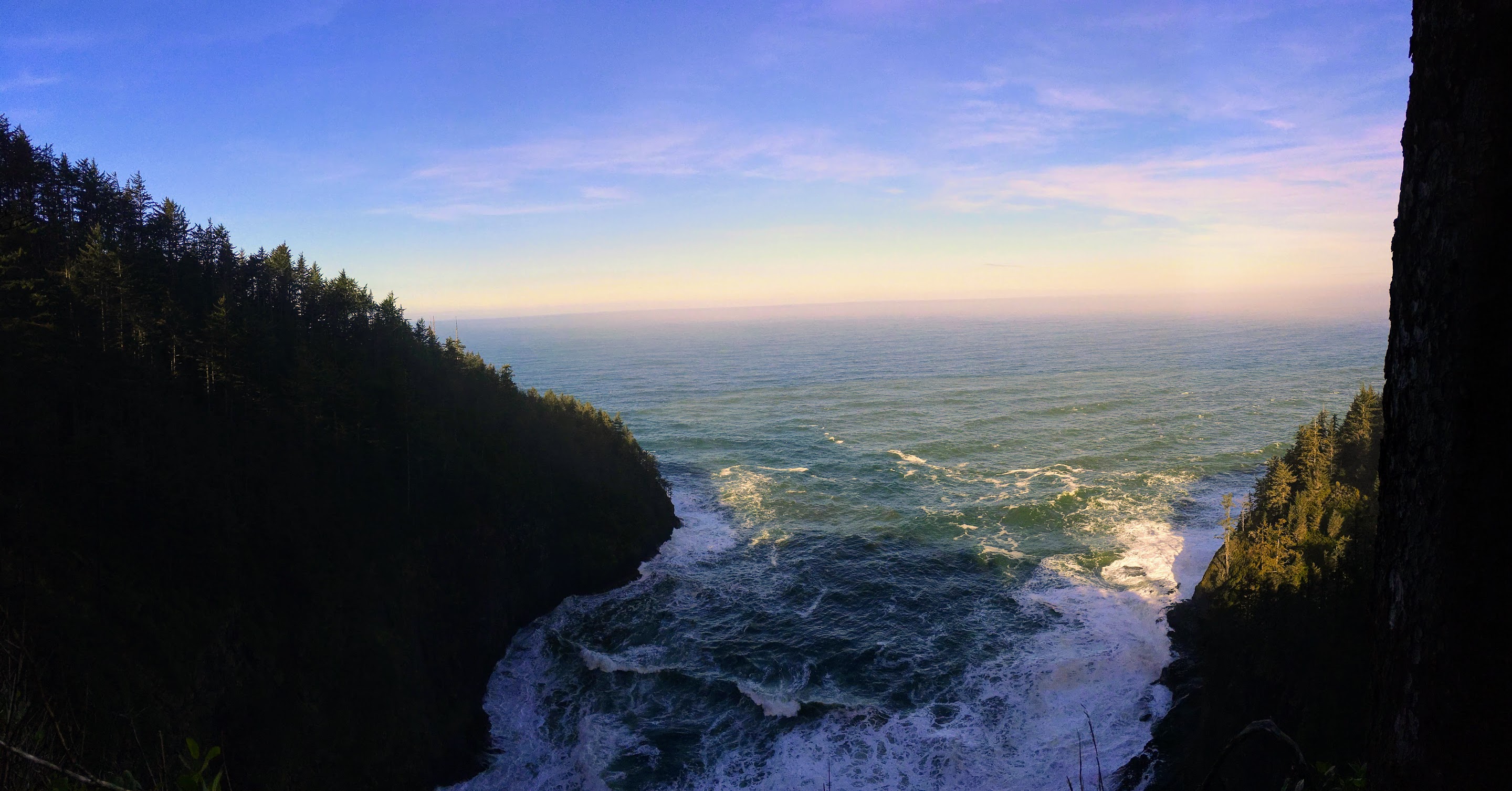 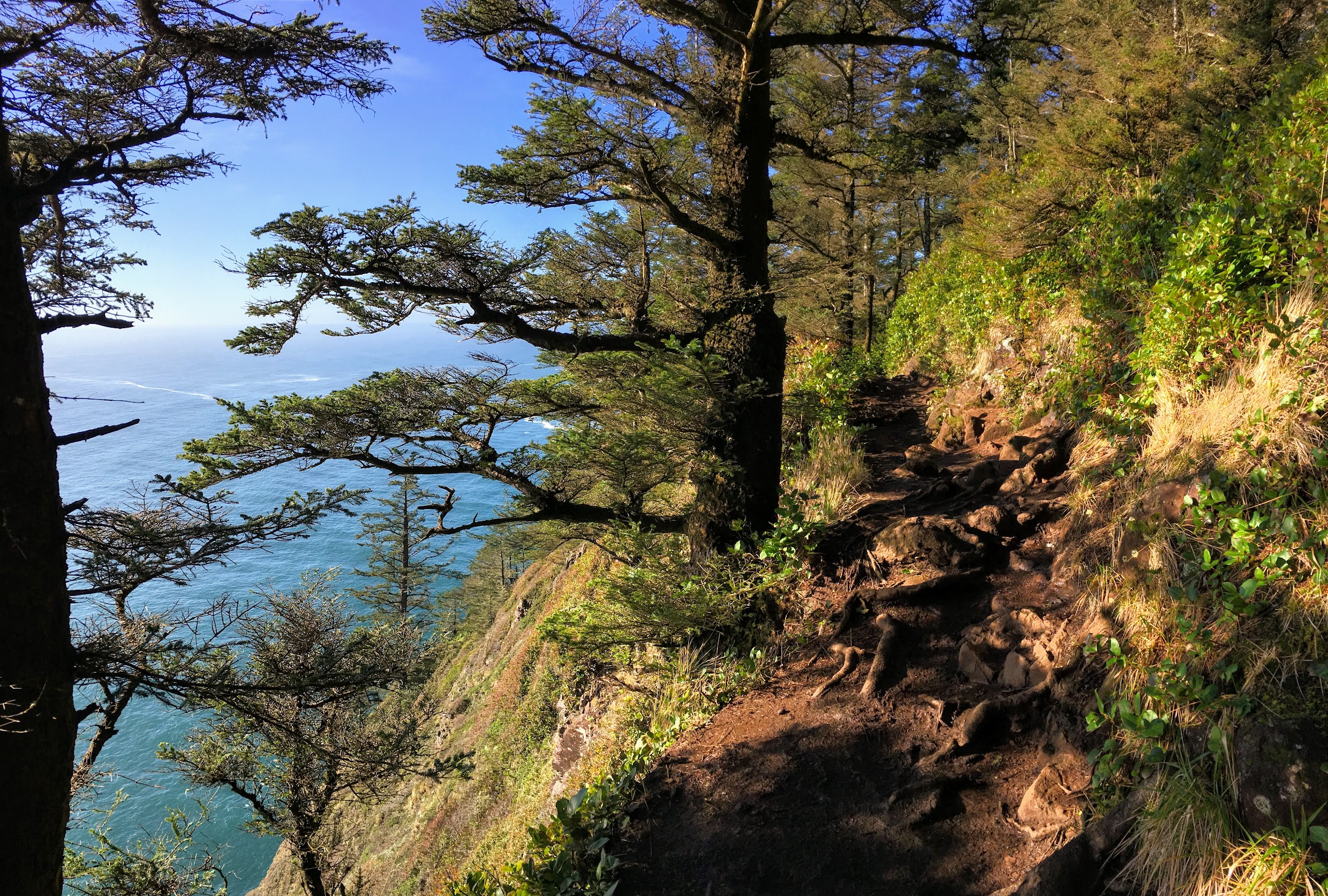 While we found no Oregon Coast waterfalls on our Cape Lookout hike, it was one of the most amazing hikes we had ever experienced to that point in our lives. 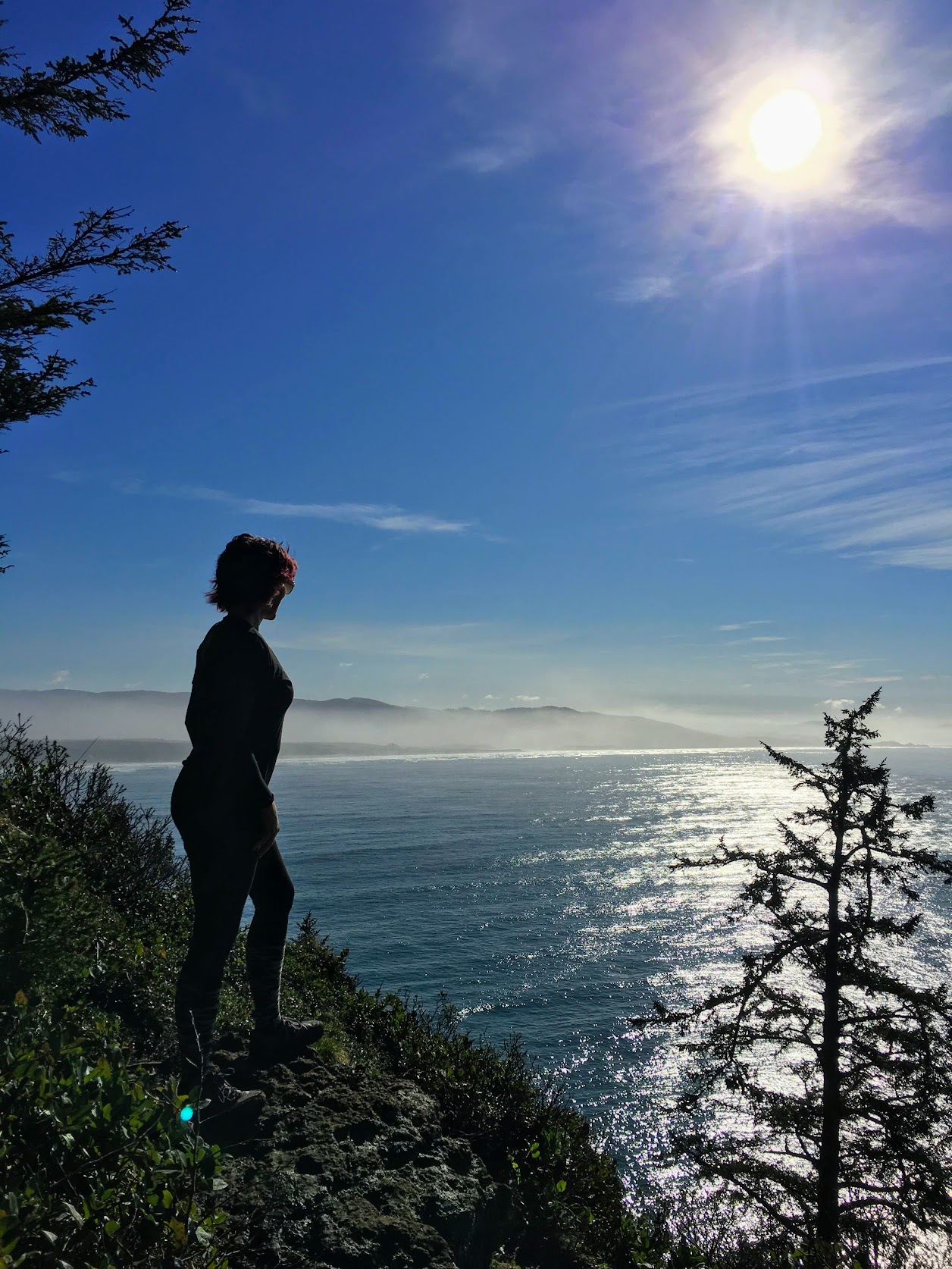 The scenery and coastal landscape was just so different from any oceanfront that either of us had ever been to (our previous experiences were in areas like Florida, North and South Carolina, and Virginia beaches).

Sunday Brunch on the Oregon Coast

Still having plenty of daylight left after hiking the Cape Lookout trail, we got back into our rental car and headed north through the charming small coastal towns of Netarts and Oceanside, where we stopped for a delicious Sunday brunch at a quaint little seaside joint called Roseanna's Cafe. 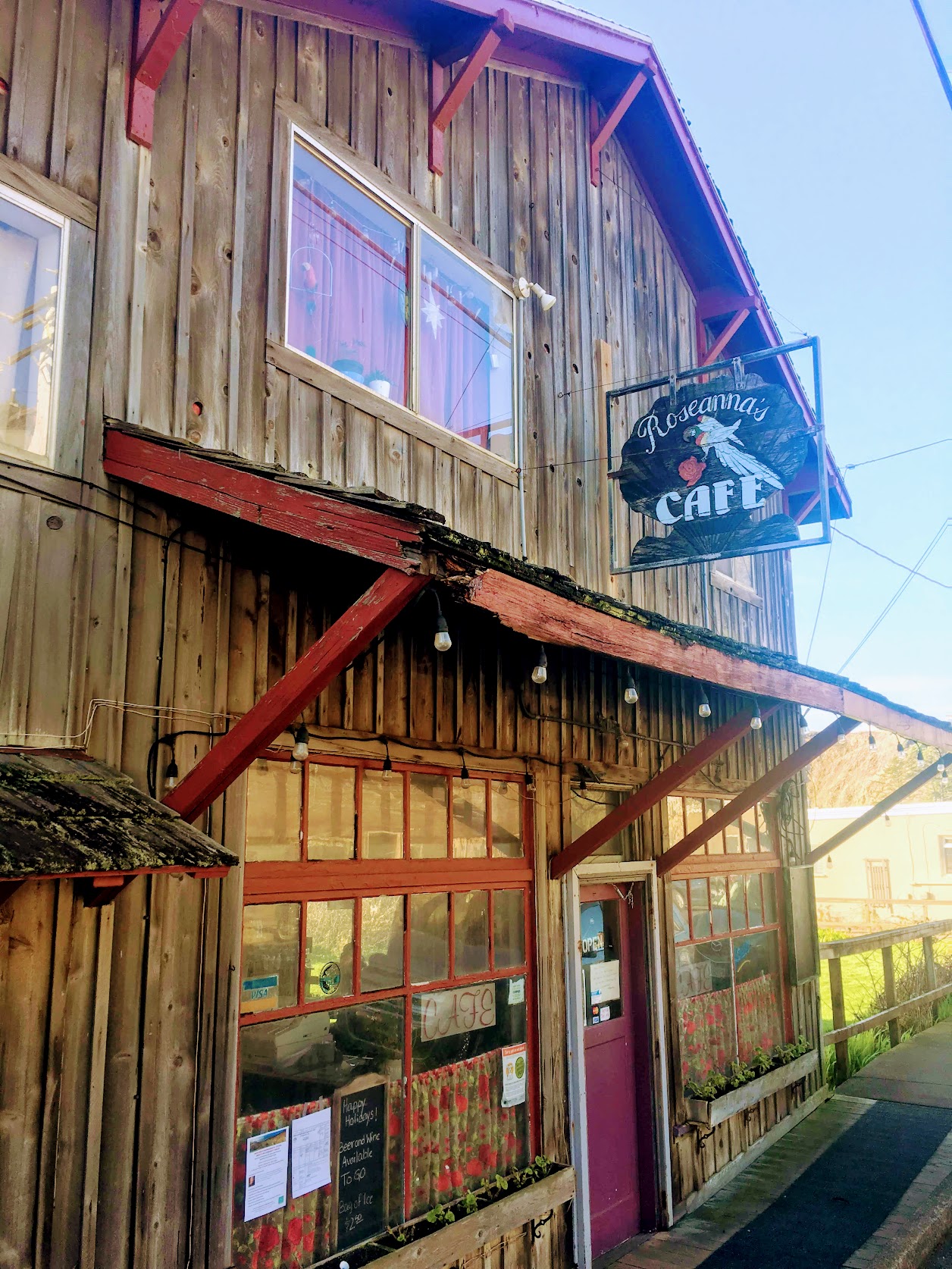 The service at Roseanna's was great and friendly, the food was delicious, and to top it off, the view of the Pacific Ocean and Three Arch Rocks from our table by a window made this a priceless experience that we will not soon forget! 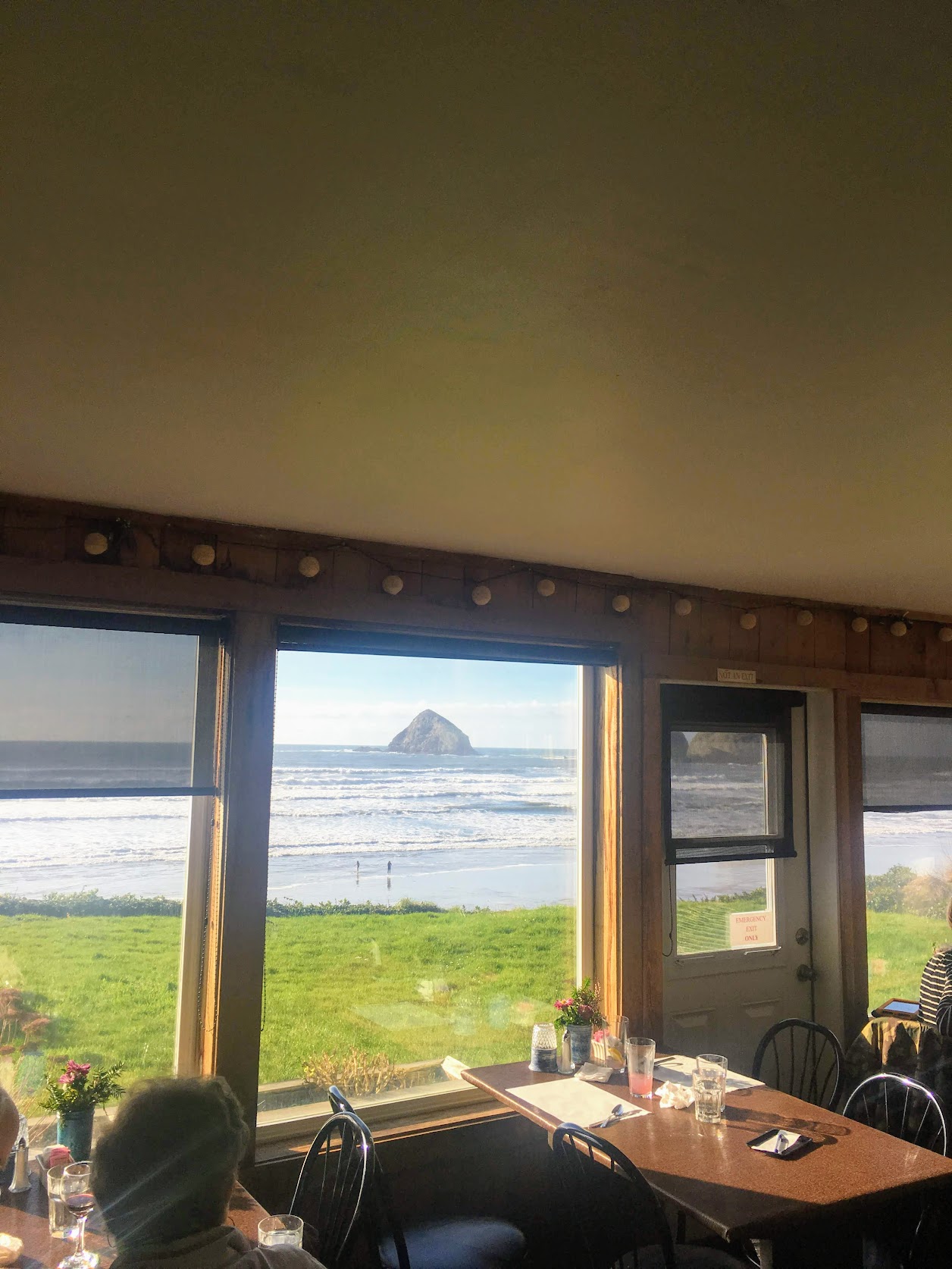 Though we had not found any Oregon Coast waterfalls yet, what captivated us at the time was the homemade Chocolate Caramel Crunch Cake at Roseanna's.   That stuff was so good that we actually turned around before we got out of town and went back to the cafe to get just one more slice!

After our filling brunch and much needed rest, we cruised on up the coast to Cape Meares and decided to see what that was all about. 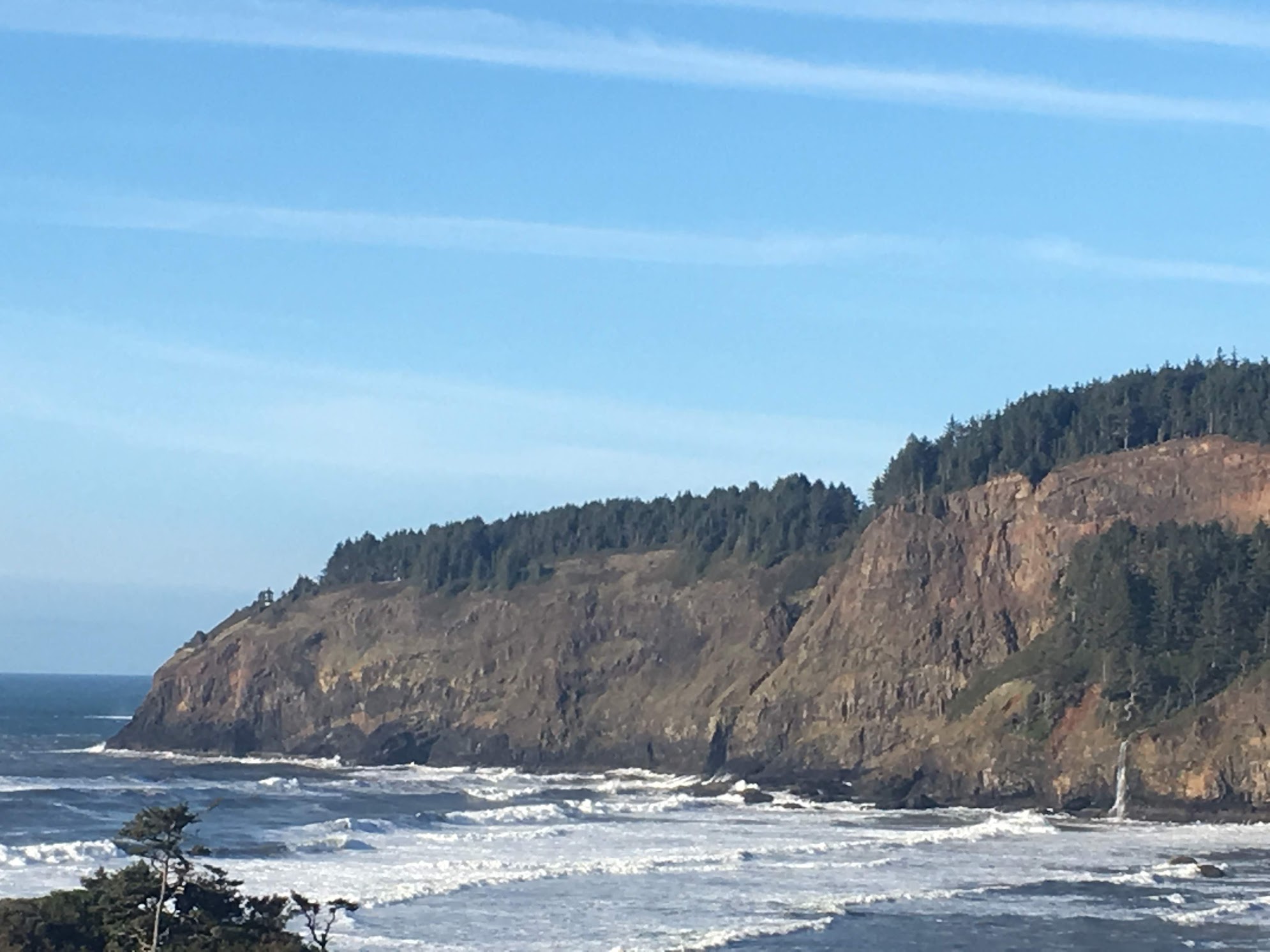 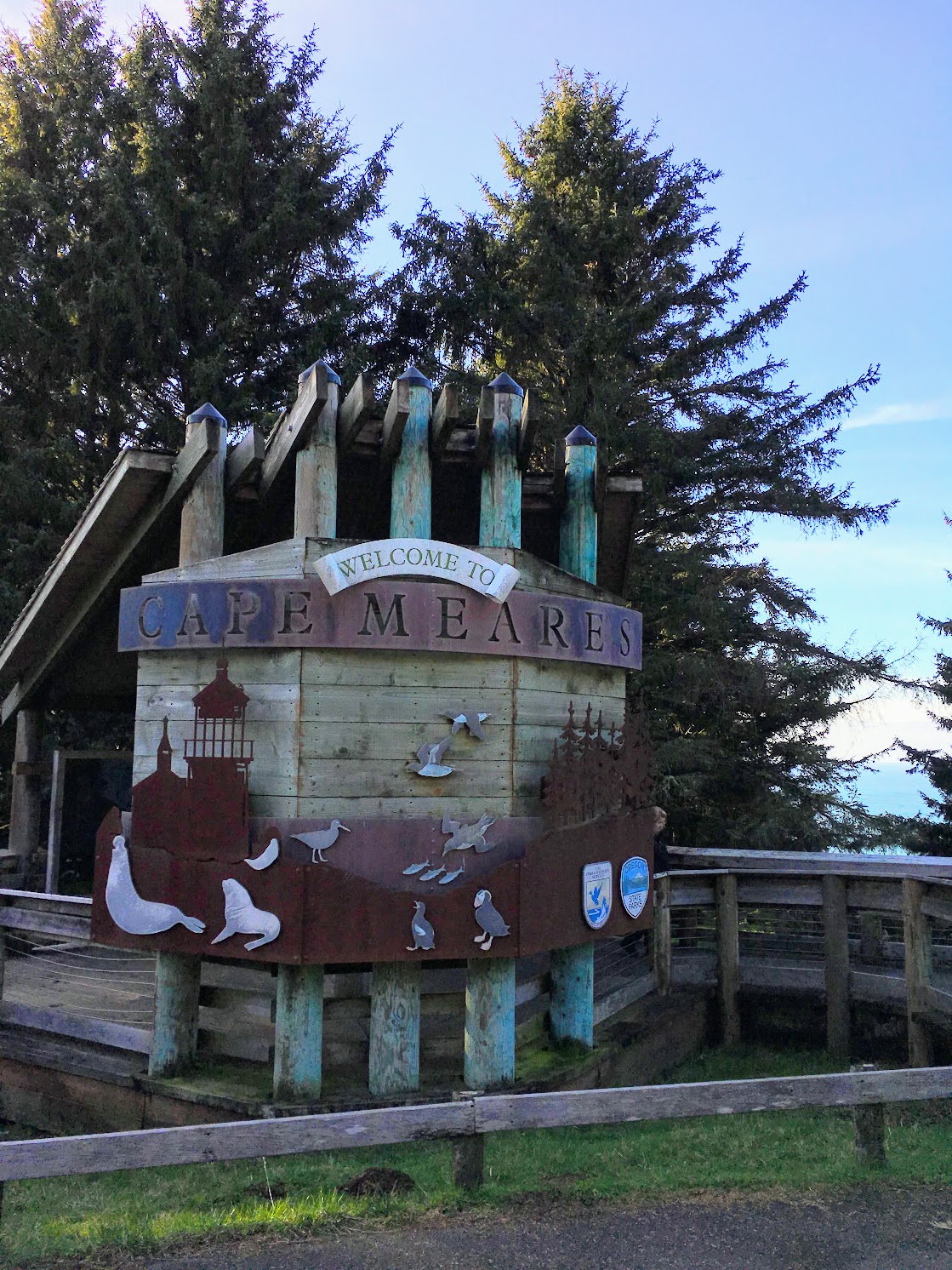 Well, they had a lighthouse and you just can't come to the Oregon Coast and not see at least one of the beautiful beacons that dot the shore all the way up the seaboard. 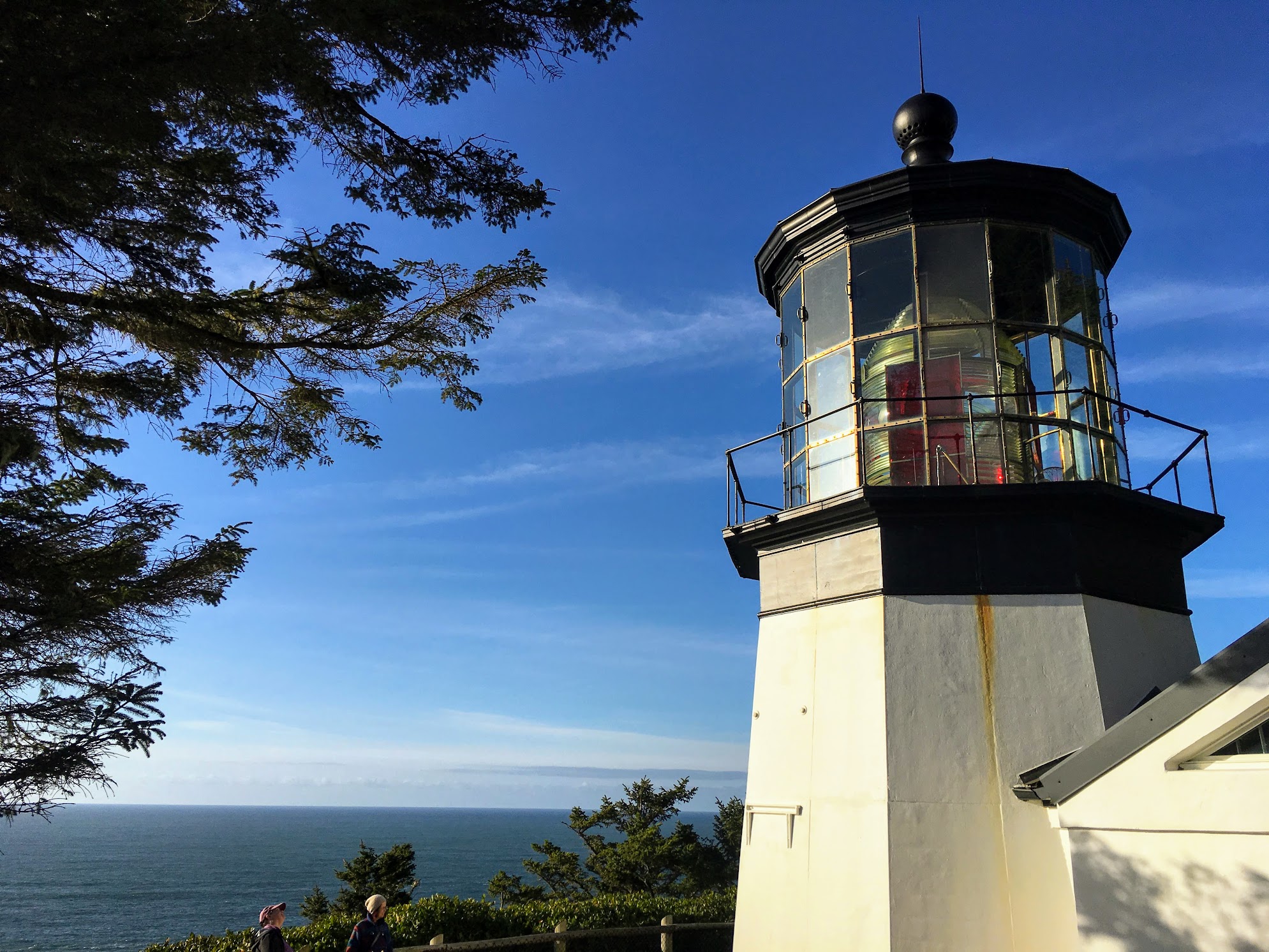 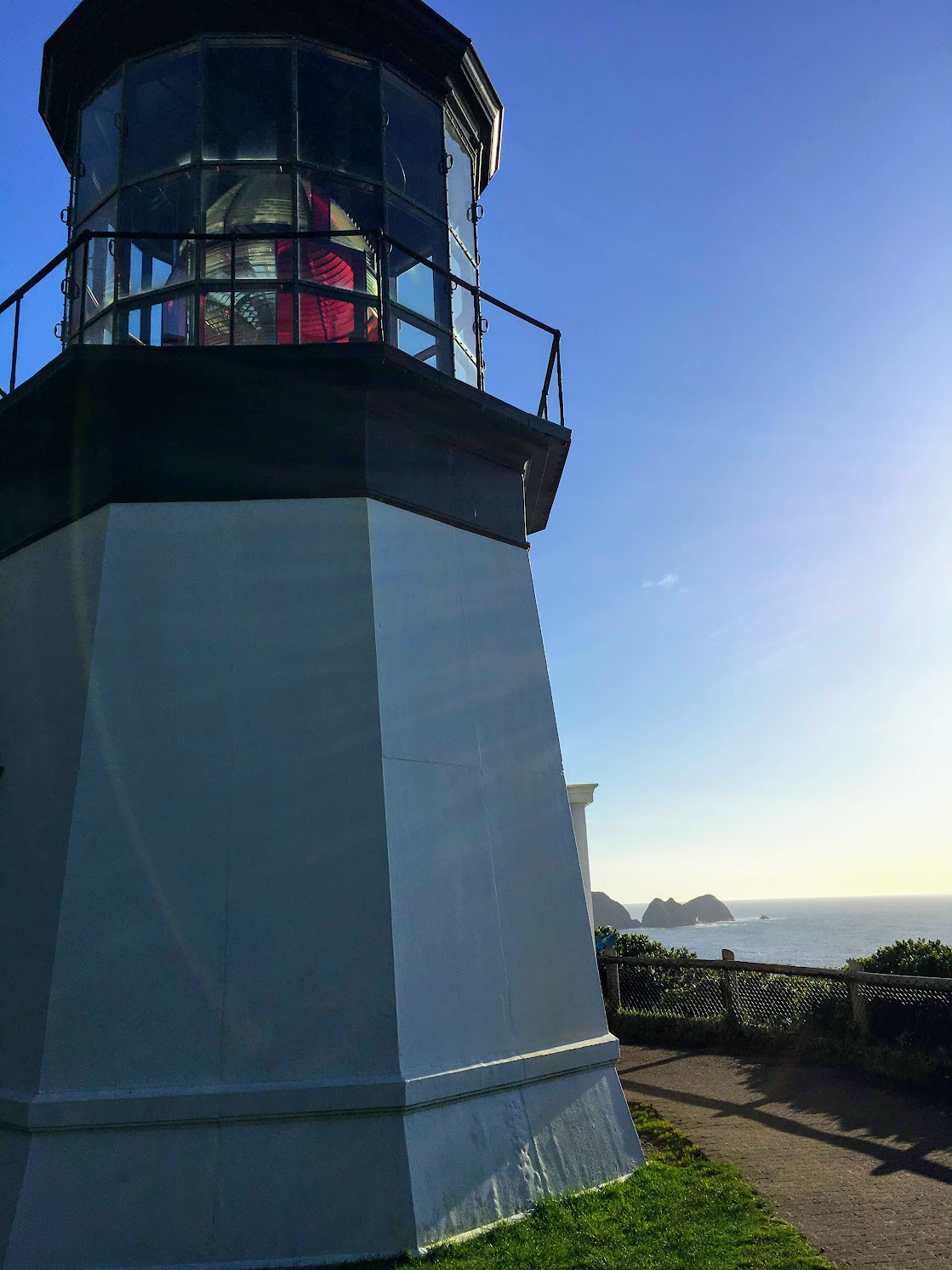 Cape Meares did not disappoint with gorgeous viewpoints all around the peninsula. 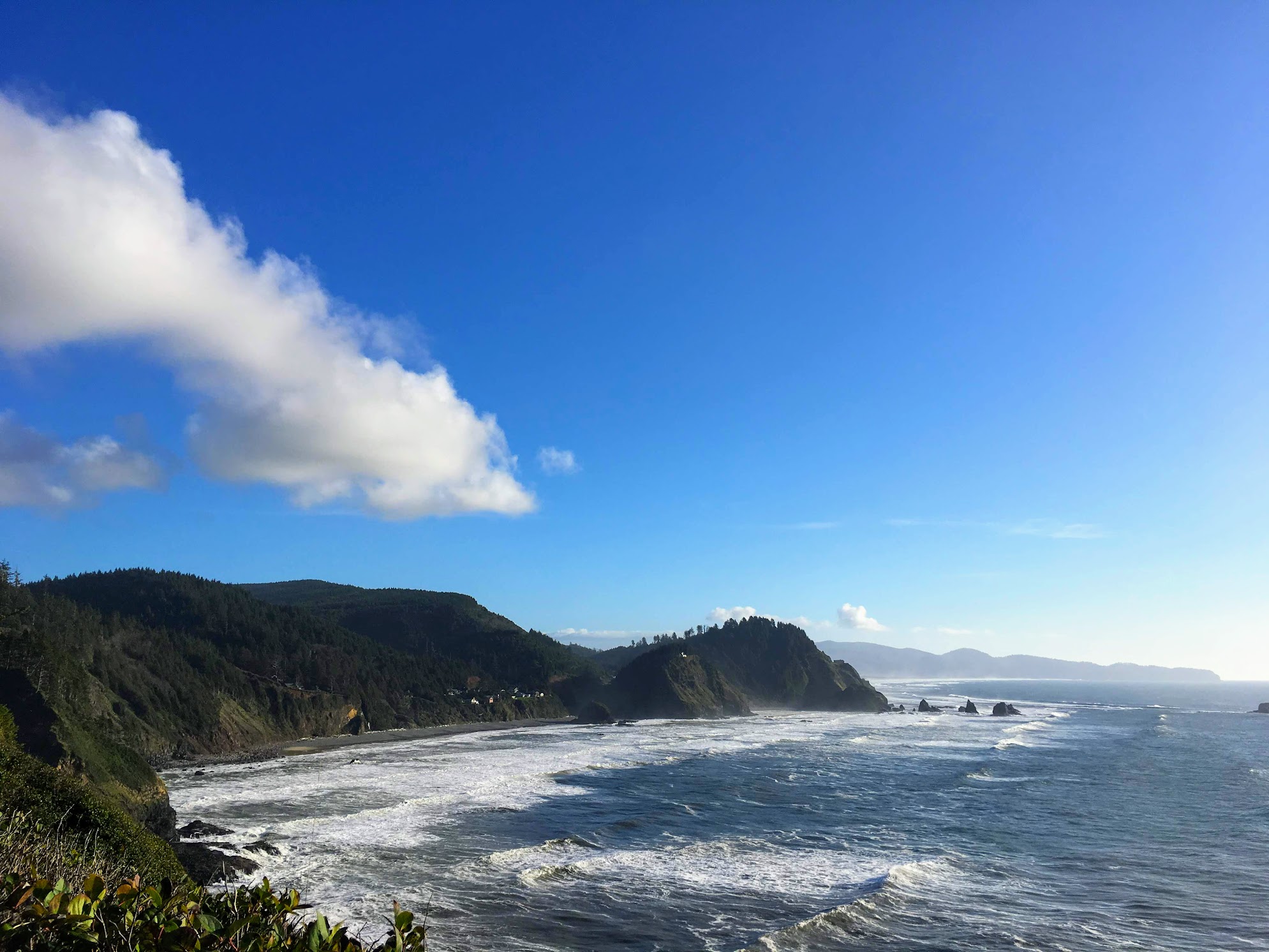 We even discovered a strangely shaped Sitka  Spruce tree that they lovingly call they Octopus Tree, which is worth the short climb up a nicely maintained trail from the bathrooms. 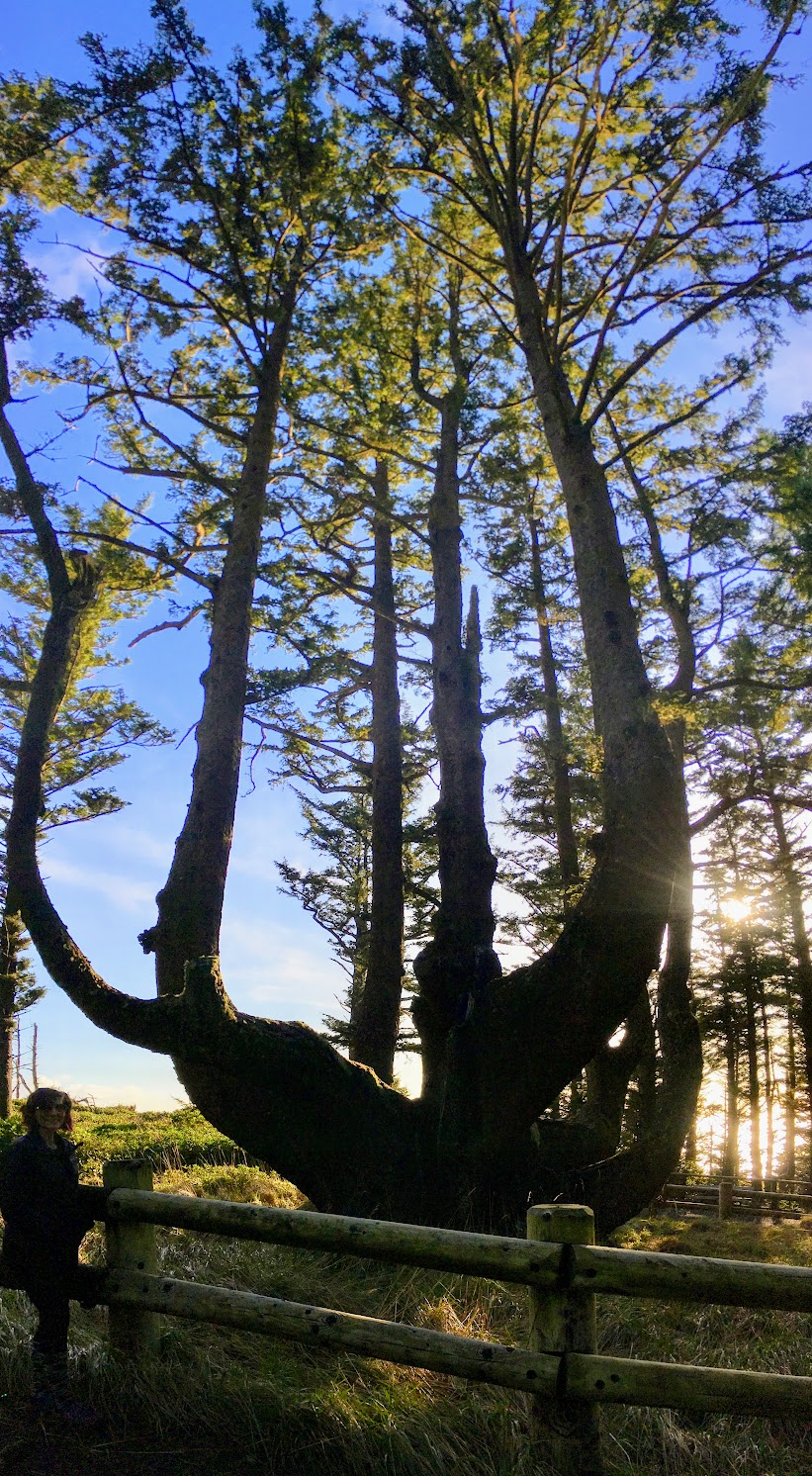 As the afternoon wore on and we were trying to wrap up our day exploring Oregon's coastal region, we left cape Meares, headed back to the south toward Oceanside and we noticed a few cars pulled to the side of the road with nobody in them.

I decided that I had to stop to investigate as we didn't want to miss anything worthwhile.

Boy were we glad we stopped when we discovered a somewhat obscure trail leading to a small beach where just a few people were playing in the surf and enjoying a leisurely walk along the shore. 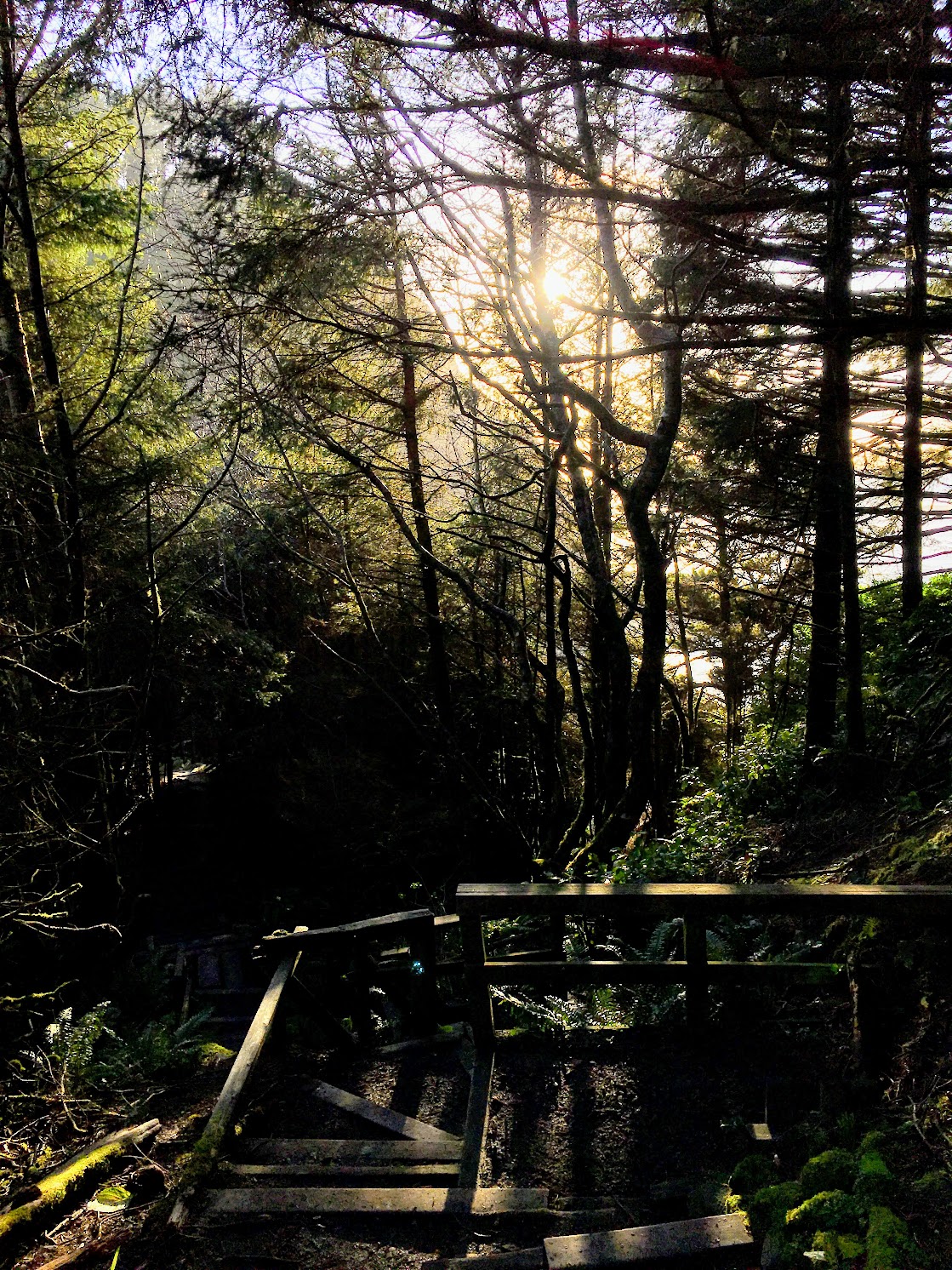 With several sea stacks in view, we agreed that this would be the perfect place to see an Oregon coastal sunset and round out our amazingly adventurous day.

What we did not expect was to see a total of 3 Oregon Coast waterfalls on that beautiful beachhead.

The first one, called Short Creek Spillway, was semi-manmade.

I assume this arrangement was made to better facilitate making the small winding trail that led to the beach and out into the ocean, while making erosion a little more controllable.

The second one, we found after crossing Short Creek's path across the beach, past the beautiful sea stack, and down the beach a little way to a large pile of timbers just below Larson Creek Falls. 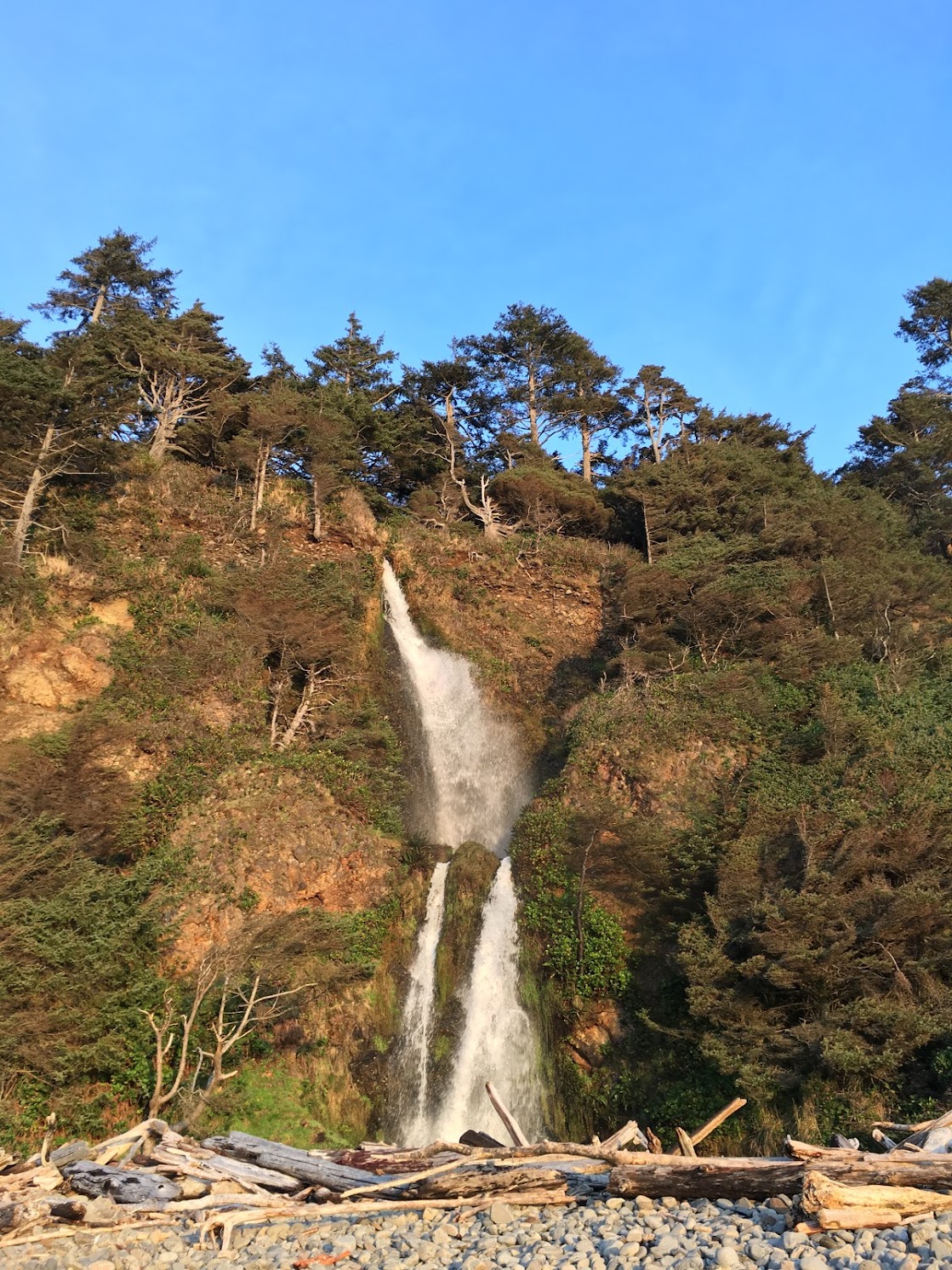 The third Oregon Coast waterfall at Short Beach was all the way down to where the Cape Meares peninsula jutted out into the waves of the Pacific.  I cannot find a marked creek on a map, so I am assuming that since we were there in a pretty wet season, it was just a seasonal runoff. 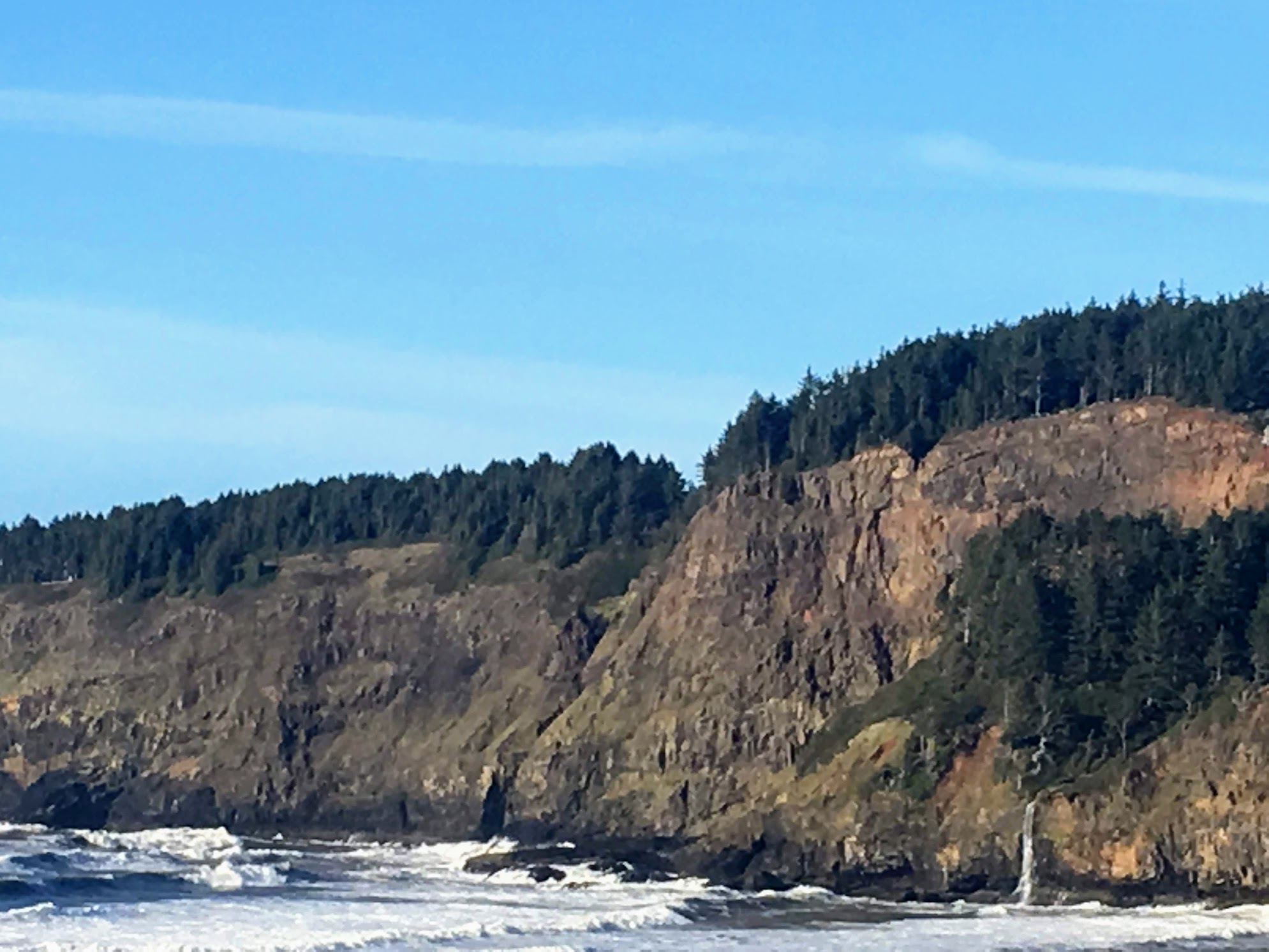 We didn't hike down the beach that far, so we only saw the falls from a distance, but it enhanced the beautiful coastal scenery nonetheless. 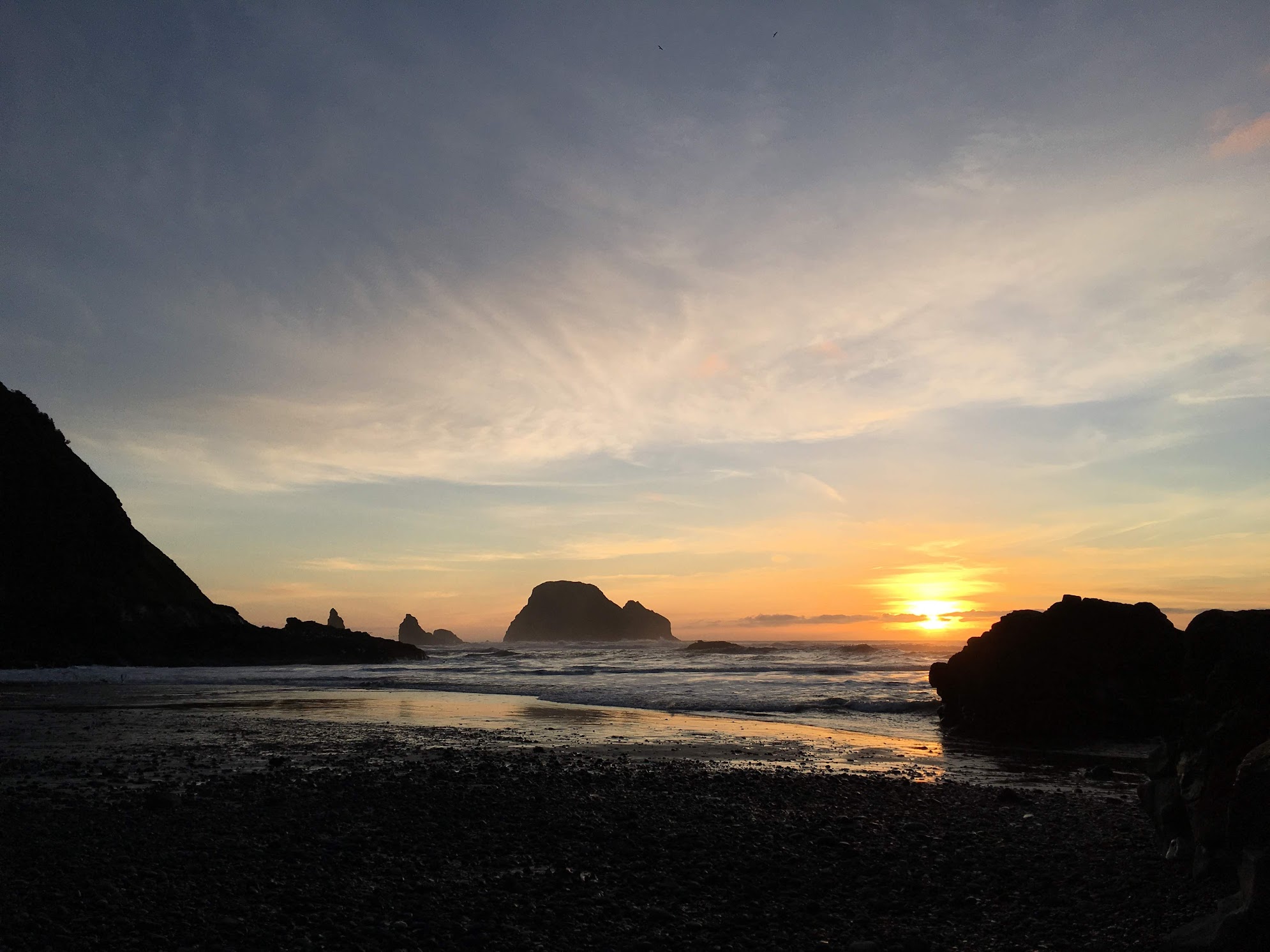 After we made our way back down the beach and up the trail to the road, we made our way south in the car back to town of Oceanside for one last glimpse of the Oregonian sunset sky overlooking Three Arch Rocks. 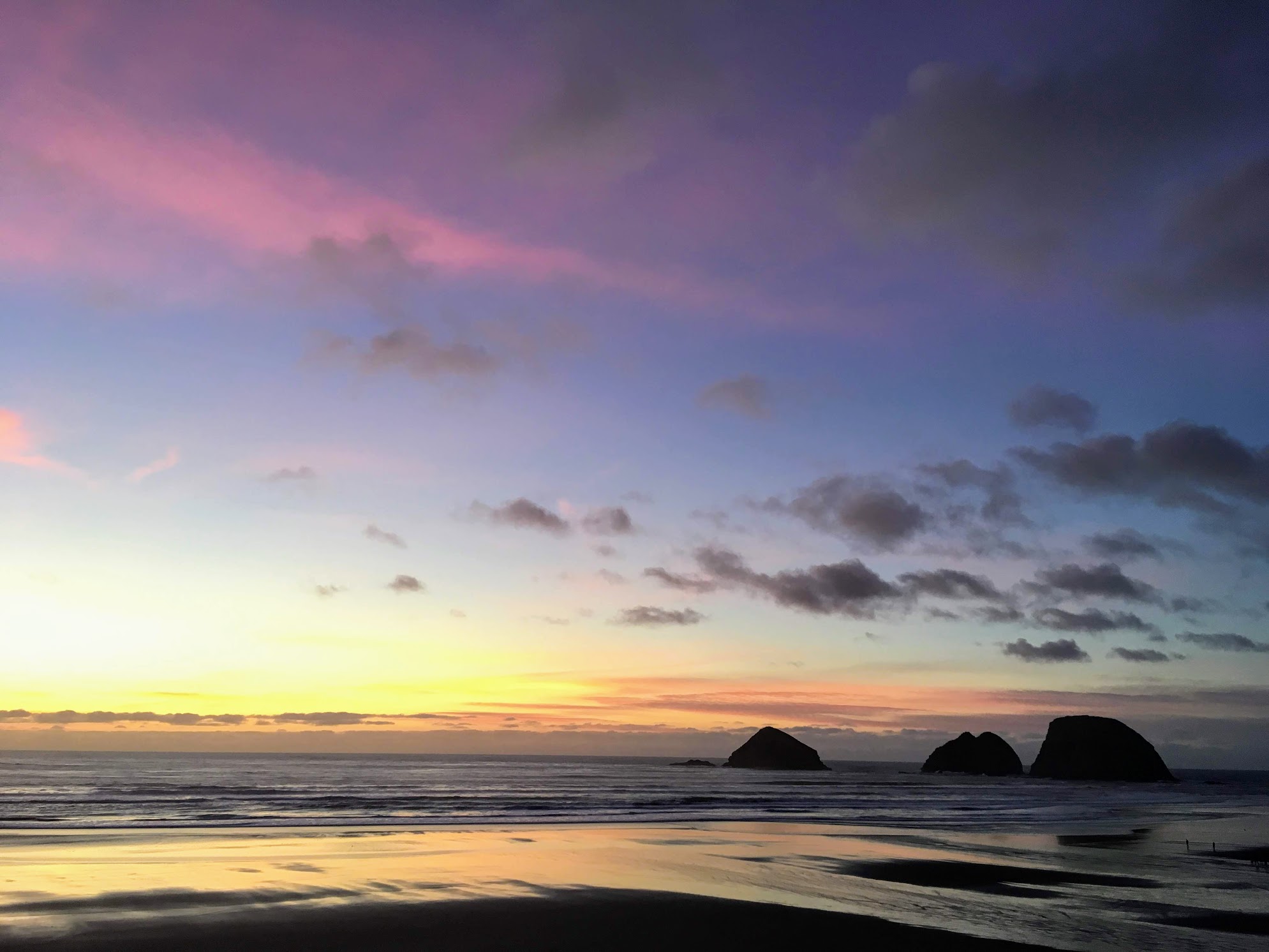 If there ever was any doubt that the heavens declare the glory of God and the firmament shows His handiwork, it should go out the window looking at this sunset sky above Three Arches Rocks.

This was the perfect ending to a perfect day of hiking, adventuring, and our discovery of 3 Oregon Coast waterfalls that we will never forget!